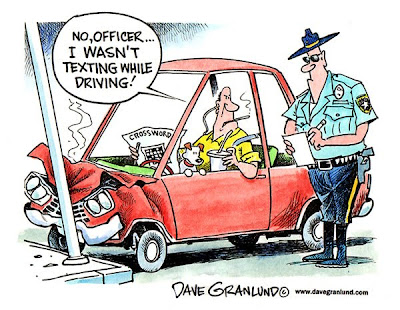 While driving down the road one day, in the very, merry month of May September, I was taken by surprise by a pair of texting eyes, and in a moment my whole world was upside down.

Or at least that's what the statist propaganda would have you believe. The problem is that the arguments and the legislation that is being justified by them are entirely arbitrary and subjective. We aren't supposed to be able (or to have the objective expertise) to know what is safe to do while driving and what isn't. Unfortunately, government doesn't have a clue either. The focus now, from listening to the government's "news" channels (CNN, MSNBC, et al.) is on text messaging, an activity that presumably takes your eyes off the road while you're engaged in it. Now all I'm hearing about is the texting issue

But when California passed its first anti-cell phone use while driving bill, it failed to include texting in its prohibited-behind-the-wheel behavior. So there then existed the infamous text messaging "loophole", until it was corrected by amending the legislation to explicitly mention text messaging. But, the California law allows "hands-free" cell phone use (in fact, it appears that no state has so far banned all use of cell phones while driving), even though studies supposedly show that using hands-free cell-phone devices is no safer. So government makes it a crime for me to answer my cell phone by hand, but okay to answer it if I've got a bluetooth headset stuck in my ear. But the state is all-knowing (or should be, if its advocates are to make a coherent case for it) and decides these things for me, telling me I'll be fined if a pick up my phone and talk on it, but the guy in the lane next to me can go on his merry way without police harassment if he looks like a schizophrenic talking to himself. But again, it's completely arbitrary and therefore unjustified and immoral.

If your answer is that we should just go ahead and ban all use of cell phones completely, you will shortly find yourself in epic fail land. A "safety" bill covering what drivers can and cannot do behind the wheel would have to be extended to cover anything deemed a "distraction" to qualify as non-arbitrary. So put that hamburger that you just collected at the drive-thru window down, fatso, and forget about reaching for a CD to pop into your CD player, or combing your hair or adjusting your make-up, or yelling at the brats in the back seat. Don't even think about listening to your favorite radio talk show while driving either; too much agreeing or disagreeing with the neocon right-wing host will take your attention off the road, and taking one hand off the wheel to change the station to a music option is no solution, you one-hand-on-the-wheel, one-eye-on-the-radio-dial menace to society! (There was an actual incident-and not the only one of its kind, I'm sure-of a group of teenagers killed when the teen driver reached over to change radio stations while going down a steep grade, with the result that the car went sailing off the road and into a rocky canyon).

So let's pass a real law that bans CD players and radios in vehicles, and open containers of food (as some states now ban open containers of alcohol in the passenger compartment) and anything else (saw a lady with a dog in her lap the other day, the dog with its head out the window as the car sped down the highway) that "distracts" the driver. Don't think anyone out there would take such a proposal seriously? Think again:

They should be banning ANY use of cell phones or text pagers while driving. Most drivers are doing one of these while headed to work each day...eating, drinking, talking on a cell phone, shaving, putting on makeup, working their radio/CD player, wearing headphones, etc. Anything but DRIVING and paying attention to the road! What a novel idea that would be!

That comment, found here, was by "Mr. Nibbles", just another little Nazi who wants to micro-manage your life. And by the way, what's up with AAA? They're now lobbying for bigger government by "launching an initiative to get state and federal laws passed that will ban texting while driving in all 50 states"? Go to hell, AAA. You deserve a boycott, big time, and anyone with a membership in your sorry "club" should immediately cancel it until you end your alliance with our enemy the State.

Think about it; do we really want to give the pigs cops more excuses to pull innocent people over, considering the power-trip most cops now seem to be on, and the dramatic rise in recent years in outright police brutality? 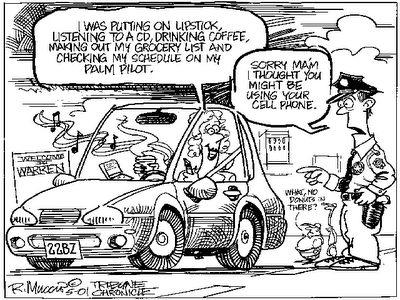