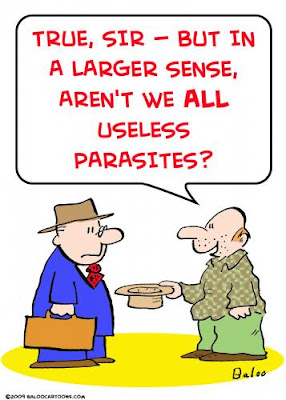 My real life is quite boring. I went to the store on my way home yesterday. I just wanted to get a few items I didn't really need. I must remember to reform myself, for the draw of Walmart ruins my budget. Still, this time I was determined to only walk out with the "essentials" , which in this case meant paper plates, paper bowls and plastic spoons. Those items help to support my canned-food diet. I've got lots of chili, soup, beans, and Chef Boyardees lining the shelves, and as these are currently my main source of nourishment, the only other thing I have to be sure to have on hand is a good can-opener, though with the pull-top option on many canned delicacies, I can even dispense with that.

I'm sure the regular clerks assume (that is, if any of them occasionally come out of their normal brain-dead stupors) that I either throw a lot of parties or go on a lot of picnics. But the disposable utensils are just another symptom of my laziness. It's easier to me than washing the dishes after every meal. Plus, unlike some luckier babies who were introduced to precious metals in infancy, I was born with a plastic spoon in my mouth, so eating off of paper and plastic is part of my heritage. If only the fates had been kinder by giving me a nicer birth spoon, I might have ended up as one of Ayn Rand's men of ability.

So, to continue, as I wheeled my cart down the crowded aisles I succumbed to temptation a few times, resisting whenever I could, but falling short more often than I'd planned. I left the poor man's department store with two bags of stuff more than was necessary. However, I was still proud of myself for my overall willpower, because I did put that box of Little Debbie snack cakes back.

As I left the parking lot and drove down the street that would take me back to the freeway, I saw a young man on the corner holding a sign. Here's what his cardboard message said, verbatim:

It seemed a message just a bit too contrived. There was no puppy in sight, so I guess he left the poor creature back at the cardboard box from which he'd fashioned his sign. The word "dollar" was written in green, and the words "will work" below it were much smaller than the rest (as if he felt he'd be violating the panhandler code if he left out the willing to work part, but feared someone might actually take him seriously about it). The "God Bless" at the end was big and bold, though.

Based on his sign and his appearance (clean-shaven face, new shorts and shirt and shoes) I think he needs to go back to panhandling school and take a few more courses.

Considering that I ordinarily look like a bum without even trying, if I decided to join him on the street corner, I'd be ready to go without much training. Plus, I've already got all those canned beans. 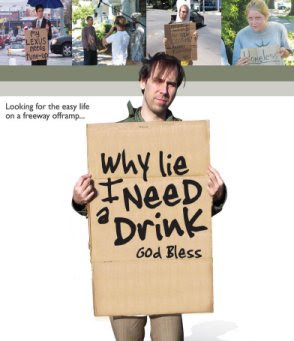