The Story of Sibel Edmonds 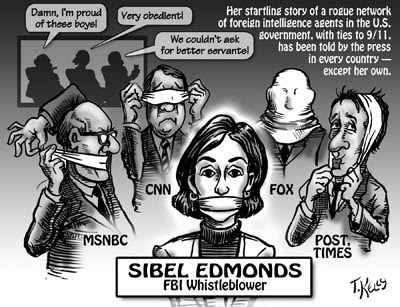 Sibel Edmonds has a story to tell. She went to work as a Turkish and Farsi translator for the FBI five days after 9/11. Part of her job was to translate and transcribe recordings of conversations between suspected Turkish intelligence agents and their American contacts. She was fired from the FBI in April 2002 after she raised concerns that one of the translators in her section was a member of a Turkish organization that was under investigation for bribing senior government officials and members of Congress, drug trafficking, illegal weapons sales, money laundering, and nuclear proliferation. She appealed her termination, but was more alarmed that no effort was being made to address the corruption that she had been monitoring.

The American Conservative interviews “the most gagged person in the history of the United States of America.”


And, from AntiWar Radio, Scott Horton Interviews Philip Giraldi (interviewer of Sibel Edmonds) and Joe Lauria (co-author of a series of articles on Sibel Edmonds for the London Times).

h/t to The Distributed Republic
at 7:42 AM