Posted by Nick
I was watching TV (God knows why, since 90% of the time there seems to be nothing worth watching on the idiot box) and saw one of those law firm ads soliciting clients who may have been harmed by a particular prescription drug. I then had the pleasant thought of throwing all the trial lawyers and all the pharmaceutical company executives together in an arena and having them fight each other to the death. It would be more compelling entertainment then watching the Christians and the lions.

Once that was done with, like any great idea, it could be expanded to include other parasites and exploiters in our society. How about bankers, IRS agents, Congress, the Border Patrol, the countless faceless bureaucrats who make life difficult and miserable...well, you get the drift.

As long as there are lawyers, there will be "lawyer jokes". And lawyers will show how those jokes ring true by trying to explain how such lampooning really constitutes praise for their profession, thus by example justifying the jokes more than ever.

"The first thing we do, let's kill all the lawyers" 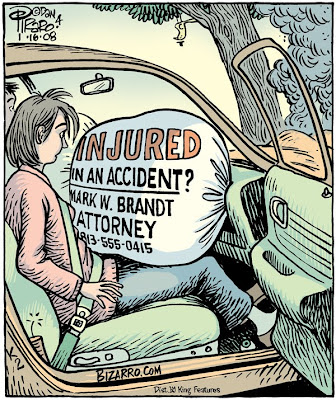