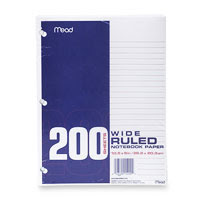 So I went to Wal-Mart looking for some filler paper for my binder recently and could not find any in the regular stationary aisle. Then an ah hah! moment and I went to the special "Back to School" aisles (there were two of them) and searched for my paper. I did not find it but did notice a Wal-Fart employee kneeling at the end of the aisle stocking something on a shelf. I asked politely if they had any loose leaf paper. "What's loose leaf paper?" he asked. I informed the useless dolt that it was paper to refill a binder. "Oh yeah, I think we had some over there" he said while he pointed to the shelf along the wall at the end of the aisle. He turned and craned his neck. "I don't see it now though," he told me, without another offer of assistance. I went to search again on my own, and just around the corner, in the main aisle, stood a giant cardboard display filled with loose leaf paper at just 50 cents a pack. I guess Mr. Employee of the World's Largest Retailer just didn't notice it. Good job Wal-Mart on your employee training! Or is it just that customer service is not cost effective? Must be, because everytime I need help in one your stores, I don't get any. I only shop there for the prices, which I guess is the whole point, 'cause there sure ain't any other reason to.
at 6:43 PM 0 comments

Another Form of Surveillance

Posted by Nick
Humans seem to have this innate sense to willingly surrender personal liberties, even in the form of a god. God is simply another form of surveillance to which we personally surrender free will. From childhood to adulthood, private to public life, we allow even our own minds (yes, personally created paranoia via the form of a god) to control us. From Liberty-Watch.
at 5:28 PM 0 comments

Email ThisBlogThis!Share to TwitterShare to FacebookShare to Pinterest
Labels: God

Should you buy organic?

Posted by Nick
What Should You Buy Organic?
at 3:41 PM 0 comments

I'd Rather Be Blogging

Posted by Nick
Everyday I want to just go home after work and blog, but alas I can not. I do not have internet available in my current, temporary location. I have items, timely ones, that I want to comment on, but again, my schedule and lack of computer will not allow it. I will try to add posts here and there, so check in often to see what, if anything, is new.
at 2:20 PM 0 comments

Email ThisBlogThis!Share to TwitterShare to FacebookShare to Pinterest
Labels: Blogging

Barefoot In The Wal-Mart

Posted by Nick
Apparently some people are fascinated by the fact that you can get your feet dirty by walking around barefoot inside a Wal-Mart store. I do know they clean the floors at Wal-Mart on a nightly basis because I happen to know someone whose job that actually is. Is Wal-Mart a more likely place to get your feet dirty than other locales? Maybe it is, but if so only due to its popularity (more foot traffic down its aisles) leading to dirtier floors. If the floors are washed at night when the store is empty (or nearly so) then by the time most shoppers arrive later in the day the dirt has probably already been laid down by many dirty shoes. Thus, dirty feet if you dare to walk barefoot.

"They Took The Beach Away From Me" 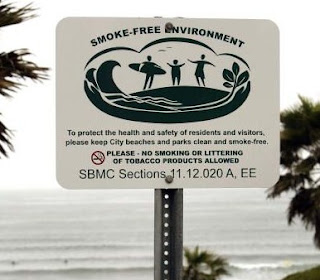 I don't smoke and I've never consumed alcohol on the beach, but I had a conversation with someone who enjoys smoking and drinking while at the seashore. "They took the beach away from me," he said. How so? I asked him. "Well, I like to take a lawn chair, a pack of cigarettes, and an ice chest full of beer and sit on the beach listening to the radio." He then said he has stopped going to the beach because that was what he liked to do there. Was he harming anyone by his beach activities? I don't see how. He happens to be a fairly quiet, nice guy, who when he's not working enjoys growing tomatoes on his back patio. But because some people think, due to their personal preferences, that "there otta be a law," he can no longer engage in a leisure activity that was harming no one without risking being harassed, fined or possibly arrested by the police. Thanks Big Daddy government worshipers (you know who you are) for helping to ruin someone's innocent pleasures once again.
You see, alcohol and smoking have been turned into illegal activities at San Diego beaches. Someone might "get hurt" by, for example, second hand smoke, even though open air smoking doesn't even present an aesthetic unpleasantness the way smoking indoors does. Look at the words on the ridiculous sign in the photo above: "To protect the health and safety of residents and visitors, please keep City beaches and parks ... smoke-free." If it wasn't such a perfect example of the constantly encroaching Nanny State, it would be knee-slapping hilarious. Come to think of it, it is still pretty funny, and another example of politically liberal do-gooders run amok.
at 11:00 AM 0 comments