Posted by Nick
Many auto buyers who rushed to take stolen loot CARS "rebate" money in order to purchase a new vehicle are now having second thoughts, and while I certainly don't have sympathy for such thieves, I can understand their regrets. A survey in late August revealed that over 17% of Cash For Clunkers buyers have doubts about being lured into taking on more debt. The normal buyer's remorse percentage for new car purchases is around 7 percent.

Since Americans are already burdened with too much debt, a government program designed to create more of it never made sense, but that's the logic behind Obama's entire spend-the-country-into-ruin economic "recovery" plan. 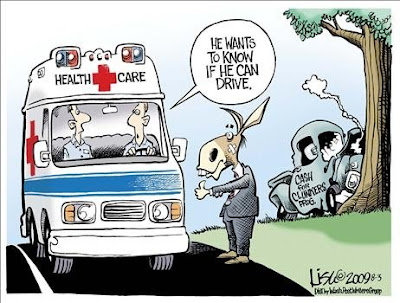 Charities that accept used car donations were hurt by the program, as were the poor, many of whom rely on the used car market for affordable transportation, while wealthier Americans were disproportionally helped, as having more money and actually being able to afford new car prices apparently caused many of the well-off to seek out free money stolen from less fortunate individuals through taxation, to help buy that new Lexus or Mercedes.

A recovering moron, who was as clueless about clunkers as he was about cops, made this comment regarding the fact that many people would actually drive more after trading in their old vehicle under the C4C program:

Why would they drive the new car more than the old car?

They hardly ever drive the old van.

They buy a new car to replace an old van they hardly ever drive.

They then drive more.

There must be a reason why they'd suddenly start driving more.

Quicker than you can say, “Holy statistics, Mr. Wizard,” the numbers nerds ascertained that the new vehicles sold under C4C will use more—not less—fuel than the beaters that were turned in and destroyed.

How can that be? Think of it on a personal level. Suppose you had a 10-year-old particulate belcher that, as the euphemism goes, needed work. Even if you lived in an Orlando suburb, you’d still be less than excited at the idea of piling the kids into it and lighting out for Disney World. But that new Malibu that gets a hell of a lot better mileage is a different kettle of green. You trust it; it’s economical; you drive it more. A lot more, according to another piece of research.

CNW surveyed drivers involved in the purchase of the first 239,000 C4C vehicles. The average intended annual mileage was 10,894, up from the actual clunker mileage of 6,162. For those of you without a calculator falling readily to hand, that’s nearly double.-source.

And I'm proven right once again, while the morons, as usual, are wrong.

Email ThisBlogThis!Share to TwitterShare to FacebookShare to Pinterest
Labels: Cash For Clunkers