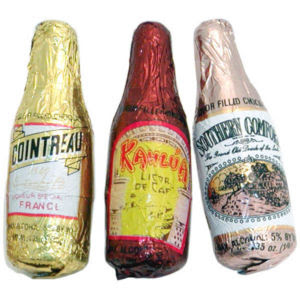 I was in a store just browsing at all the Christmas stuff (at least that's what drew me in) and after looking at ornaments and such I began walking through the merchandise (yes, in this store the merchandise is scattered everywhere so it is possible to walk right through it) when I came upon a display at the end of an aisle that featured liquor-filled chocolates in the shape of little liquor bottles.

I thought monetarily (and you thought I meant momentarily, didn't you?) of buying some for my mom, but decided against it after looking more closely at the prices.

What struck me most though was the large-print sign that had been posted along with the display: NOTICE! UNDER STATE LAW YOU MUST BE AT LEAST 21 YEARS OF AGE TO PURCHASE LIQUOR-FILLED CHOCOLATE. I then picked up one of the boxes of the alcoholic candies and read the label. It was only 3.5 oz. and it said that the alcohol content was not more than 5%. I was very relieved to know that the government was protecting people who were only 20 years and 11 months of age from buying such a dangerous product, so dangerous that they weren't allowed to purchase it for another month when they would reach the magical age of 21.

But then upon closer inspection I read a little warning on the box itself: Unlawful to sell or give to persons under legal drinking age.

So, I'm glad the price made me think twice, but if I should change my mind and buy some of those for Mom I'll be sure to make it clear to her that if anyone should ask her about her little chocolate bottles and she is then tempted to offer them one (Mom is very generous that way) that she first ask them for their ID. I care about my mom and I just don't want to see her become an outlaw, and worse, a menace to society, because I know government only has our best interests at heart and that's why such laws exist in the first place. To violate such laws willfully (or even ignorantly, that's no excuse!) is to do evil, and I really don't want an evil mom.

Oh Government, thank you for delivering us from such evils as tiny little liquor-filled chocolates at this joyous time of the year!

Email ThisBlogThis!Share to TwitterShare to FacebookShare to Pinterest
Labels: Government