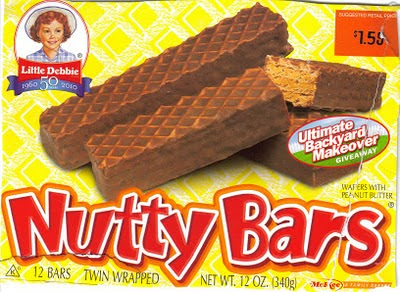 My mom was recently off for Yosemite, a trip she's taken before I might add. I thought about going this time, since the last time I went, I think Teddy was President (Jimmy "Kick Teddy's Ass" Carter, that is) so I don't remember much about it, except there was a tent and I have the lingering memory of combining potato chips with a candy bar in a snacking frenzy that I regret to this day (well, no, because if it hadn't been for that incident, my one visit to the park would be almost entirely forgotten by me - funny how one little thing like that can stay with you for so long, it's quite vivid, and I can't get that taste of chocolate and chips out of my mouth).

So, Mom is off and before going she stocked up on some munchies, including bargain priced Chex Mix (well, a bargain if you're buying it from CVS and they've "discounted" it), nuts and pretzels.


Since I knew I would be seeing her before she took off, when I stopped at the local "they cater to the Mexicans" grocery store (Mom doesn't shop at those kinds of stores much, as she thinks everything in them is Mexican, even the Little Debbies) to get a few things, and I saw the Nutty Bars on sale for only one dollar a box, I knew I had to get some. Now, these Nutty Bars are pretty cheap to start with, only $1.59 for a box of 6 two bar packs (12 bars total). Walmart currently has them for $1.25, but $1.00, that was the lowest I'd ever seen them priced.

So, I grabbed a box and put it in my cart. Mom will like these I thought. I used to buy these Nutty Bars often, much to my shame and regret. Pure junk food was my reasoning, and very bad for the waistline. But, they do make a great tasting snack. Light, almost as light as air, with a wafer cookie center with a thin layer of peanut butter and then covered with what has to be the world's thinnest layer of chocolate, so thin it doesn't even have to be warm for that chocolate coating to melt. I mean, these bars are kind of messy to eat if you aren't real careful. Even inside, with a normal room temperature, when you open a pack of Nutty Bars the chocolate is already melting and if you eat one with your bare hands you get the chocolate all over your fingers.

But boy, did I suddenly get a craving for Nutty Bars when I saw the stacks of them there in the grocery store. One dollar a box! Oh, I'll get two boxes, that way Mom will have plenty for her trip, and if she thinks two boxes is too much, I'll be there to take one off her hands.

Later, when I met up with Mom, she had her big bag of snacks ready to go.

She looked them over a moment. "No," she finally said, "they'll melt." Boy, she really knew her Nutty Bars! "You keep them. You can eat them, can't you?"


I took one box to work with me, just in case I got hungry on my breaks, you know? I discovered something strange, though, and that was having that box of Nutty Bars in my desk drawer made me hungry just by being there. I ate a pack before my first break, then took another pack with me on my break, then just before lunch, I got a little hungry again, and after lunch, feeling a little run down, I figured a Nutty Bar or two would give me a much needed boost. Before I knew it, the whole box was empty. I had wanted to save some for my television viewing when I got home. Then I remembered that I still had that second box, and I relaxed. My TV snacking would go ahead as planned.


I realized, as I watched TV Land, that I was on my third pack of Nutty Bars, and put the rest away. I was feeling real guilty now, and that gets me depressed. The next morning I went to the mirror, took my shirt off, and looked at myself, expecting the worst after such a disgusting binge. Instead, for some reason, I thought I looked pretty damn good! My stomach was not hanging over my pants as much as it was just a couple days ago. I got out the scale and went to the bathroom where I could properly weigh myself. I'd lost three pounds! I went right to the rest of my Little Debbie Nutty Bars and ate breakfast. I had to, because I've got some important events on my upcoming schedule, and I really want to look my best, you know?
at 4:59 PM