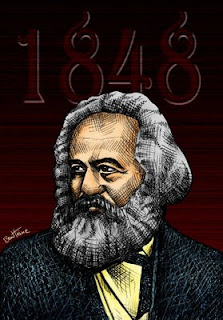 This quote was very interesting. Karl Marx said "Refusal to pay taxes is the primary duty of the citizen!"

Sometimes, I wonder if Karl Marx really was one of the top free market thinkers of all time. When I was in my State brainwashing center, I remember learning "Marx and Communism are evil!" However, we didn't spend any time reading things he actually wrote.


The context of the above Marx quote is the Revolutions of 1848, a time of great political unrest in Europe.

During the Revolutions of 1848 in the German states, the royal and military aristocracy prohibited the first popularly-elected parliament from assembling, and that parliament responded by declaring the government out-of-business:

So long as the National Assembly is not at liberty to continue its sessions in Berlin, the Brandenburg cabinet has no right to dispose of government revenues and to collect taxes.

Karl Marx, via his newspaper, the Neue Rheinische Zeitung, published this decree, adding: “From today, therefore, taxes are abolished! It is high treason to pay taxes. Refusal to pay taxes is the primary duty of the citizen!” Marx was later prosecuted for promoting tax resistance, but was acquitted after arguing that it was not illegal to promote tax resistance against an illegal government.

Hmm, acquitted because it's not illegal to promote tax resistance if the government is itself illegal. Since the US government is highly illegal, and in constant violation of the US Constitution every moment of its existence, it follows that Karl Marx would approve of American tax resisters.