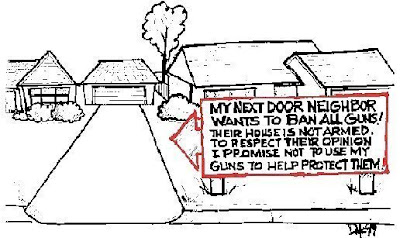 Sometimes a fallacy becomes accepted if enough people repeat it: Guns deter crime. Are people who own guns putting signs on their lawn, like people with security systems? Ginx recently asked the above question, and I replied with the following comment:

They don't have to put up a sign, it's enough if the criminal can't be sure which house has a gun-owner living in it and which doesn't. That is the deterrent. It's also why burglary and home invasion occur at higher rates in Britain and Canada (with their strict gun control laws) than in the US.

If you're a sicko creep who wants a victim, someone's private home is safer than somewhere out in public, if, that is, you can be pretty sure there are no guns inside the house that your potential victims might use to defend themselves.

Criminals in the US are more afraid of targeting occupied homes for one reason; they know that about half of the homes here have guns, and that makes every break-in a coin toss. After all, they don't want to get shot.

Now, Ginx asserts that it's some kind of magical thinking to believe that guns can deter crime, but if we are objective and are basing our thinking on the facts of reality rather than a wish or a whim, then it becomes apparent that guns deterring crime is not a belief based on fantasy or on the imaginations of gun-toting nuts (Ginx brings up the tired -and frankly, racist in reverse- cliche that it's got something to do with the white man's fear of a well-endowed black man raping his wife) but about simple facts, such as that your car is less likely to be stolen if you lock it than if you leave it running with the keys in the ignition and the windows down. Is it magical thinking to believe that locks deter theft?

Let's say you're an armed thug looking for an easy score and you want some quick cash. On the same block you see two small stores, one a liquor store with an armed owner behind the counter (maybe you read a news report of his recent shoot-out with a robber) and a chain convenience store with an anti-gun policy that doesn't allow armed employees, with a pimply clerk manning the cash register. Which would you choose to try and steal from?

If anything, it's magic to believe the police are there to protect you, when in fact they are nothing but security guards for whatever municipality employs them, and usually only manage to show up after a crime has been committed, when of course it's too late, especially if you're dead. The right to self-defense is a basic human right, and to take it away from anyone is evil.

To believe that somehow wearing a government-issued cop clown costume makes carrying a gun okay, but that it's just too dangerous to let average citizens carry the means to protect themselves, is the height not only of magical thinking, but of the statist fallacy (belief in the wisdom of a centralized, collective authority, which in the end comes down to might makes right, because the state, after all, has the bigger guns and the legal monopoly to use them against its opponents) generally.