Piggly Wiggly: It's Not Just About the Groceries 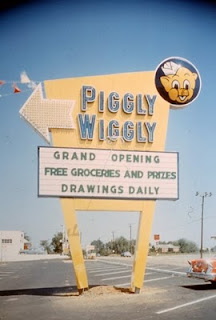 He is a Democrat in Republican clothing. He only switched parties because he moved to a Republican district. The Bible is the inerrant Word of God. He obviously does not believe that and is so arrogant he thinks no one cares. He was NOT misquoted. He has just found it convenient to say he was. If he is this bad now, what do you think you would get if he were governor? Don't get Byrned, Alabama!

The above was in reaction to Republican candidate for Governor of Alabama Bradley Byrne's statement that he believes "there are parts of the Bible that are meant to be literally true and parts that are not."

You'll notice that Byrne didn't say that there are parts of the Bible that aren't true, just that some parts aren't meant to be taken literally. But apparently in Alabama, if you're not a raving loon fundamentalist Bible believer, you're a servant of Satan.

And if the not-a-complete-crazy Christian shows up at a Piggly Wiggly grocery store to speak, well, it's boycotting time!

"Just got a call from a person at my Church letting me know about this," said uafan1198. "My family will not be shopping at Ragland Piggly Wiggly stores anymore or anything else they own.... I don't shop at places that think it is OK to stand next to people who don't believe the Bible is all true."

Mr/Mrs uafan1198 doesn't inform us of what it means to believe that the Bible is "all true", but for the continued prosperity of all supermarket companies in the Bible Belt, I'd advise not letting people speak at your stores if they doubt that Adam and Eve were real people, that dinosaurs and humans once lived side by side, that snakes can talk and that the Tower of Babel story adequately explains the origins of a diversity of human languages. Oh, and that a whole bunch of other people rose from the dead at the same time Jesus did and were seen by many (one of my favorites, actually).