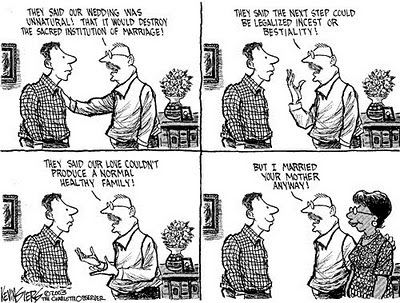 The author of this website divides the debaters over "gay marriage" into two camps:

We can not legalize gay marriage because it would damage the institution of marriage. Marriage should be between one man and one woman - if we let gay people get married, then that legitimizes gay relationships legally, and we don't want that. It makes it seem like gay relationships are the same as straight relationships, which is absurd.

2. The "Right To Marriage" Argument

Gays need to be given the same rights as straight people. If straight couples are allowed to marry, then why not gay couples? Is their love any less worthy of recognition? The government needs to give gays the right to marry right now. They are being treated as second-class citizens, which is unacceptable in the "Land of the Free."


So, the answer is to privatize marriage, a proposal (as an anarchist) I've long been in favor of, because you don't need the state to validate or approve what people choose to do when the issue is matrimony or anything else. We can run our own lives, thank you.

And here is a Christian against marriage licenses:

Black’s Law Dictionary defines "license" as, "The permission by competent authority to do an act which without such permission, would be illegal." We need to ask ourselves- why should it be illegal to marry without the State’s permission? More importantly, why should we need the State’s permission to participate in something which God instituted (Gen. 2:18-24)? We should not need the State’s permission to marry nor should we grovel before state officials to seek it. What if you apply and the State says "no"? You must understand that the authority to license implies the power to prohibit. A license by definition "confers a right" to do something. The State cannot grant the right to marry. It is a God-given right.

5 Reasons Why Christians Should Not Obtain a State Marriage License

The Christian above who is against the state granting permission is, unfortunately, not consistently in favor of freedom (like those ridiculous "arachno"-capitalists):

By issuing marriage licenses, the State is saying, "You don’t need your parents permission, you need our permission." If parents are opposed to their child’s marrying a certain person and refuse to give their permission, the child can do an end run around the parents authority by obtaining the State’s permission, and marry anyway. This is an invasion and removal of God-given parental authority by the State.

We can ask the same thing about parenting and parental authority (completely arbitrary) as we do of the state.

And the broader question on licensing restrictions is: Why should we have to get a license for anything? All licensing laws should be abolished.