Posted by Nick
If Christianity was true, what would we expect? No real historical record of the life of Jesus (outside of the contradictory and apparently legendary accounts in the gospels); a savior who comes to save humankind from the fate of hell, but who tells his disciples that "blessed are they who have not seen me, and yet believe") and who, after his resurrection from the dead, leaves the planet with only a few witnesses watching him disappear into the clouds. Smells awfully like a cult to me, where delusion rather than facts rule the mind.

"Uh, he disappeared into the clouds, went up to heaven."

"What! Can't I see him? I really want to believe in this Jesus of yours if he's real."

"Nope, he won't come back until the end of the world."

"He's coming VERY soon, yes, but remember that a thousand years is like a day to the Lord, so you might be dead before He comes back. Besides, if you wait until He returns, it will be too late. He'll cast you into the eternal flames with all the other unbelievers".

"Oh, He does, VERY much, that's why He died on the cross for you. But you have to believe he rose from the dead to be saved."

"I'm not believing any nonsense like people rising from the dead unless I can see the proof for myself!"

"It's there in the Holy Gospels."

"That's no proof! There are lots of fanciful stories I can read. Do you believe everything you read? I sure don't! Now, how am I supposed to get saved without seeing this Jesus myself?"

"Faith. You must have faith."

"Faith? Only a lie needs faith in order to 'believe' that it's true. I'm outta here!"


Wouldn't we instead expect something like the following if Christianity was true?:


Let's start with a basic, "mere" theism. If there is a God, even an all-powerful, all-knowing one, and quite capable of performing any miracle, it wouldn't automatically follow that God would make miracles part of its plan for the world. All of this God's purposes might be accomplished through "natural" means, without any obvious interventions going on. At the same time, this God could even be answering prayers, but without revealing itself directly (and prayer experiments would therefore be worthless in detecting the efficacy of prayer, as such a God would refuse to make its existence known by such tests).

So it's possible a God exists who accomplishes its ends without overt supernatural means.

But let's now consider the Christian God. Unlike a generic God (the God of a philosophical theist) the specific God imagined by Christianity is out to save the world (John 3:16) by means of a plan that does involve miracles, including the major miracle of the resurrection of Jesus. That being the case, this God would want to make the evidence of his plan indisputable (you would think) since everyone's eternal destiny depends on it. Of course, you could make the assertion that the evidence is adequate (it isn't) or at least that it is enough, with the help of the Holy Spirit, to get people saved. But how many people? God, the Bible tells us, "is not willing that any should perish". So why not make the historical evidence for Jesus' death for our sins something that a reasonable person could at least consider more reliable than it appears to be? Couldn't Jesus have come down from the cross?

Okay, so he HAD to die (why?) but even so, he wouldn't have had to interrupt his suffering on the cross in response to the taunts of "If you are the Son of God, come down from the cross!" and "He saved others, but he can't save himself", in order to stun the crowd that was watching him die. 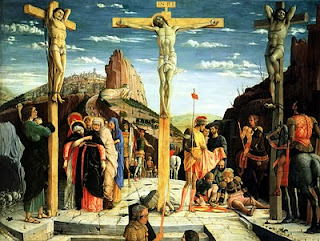 After dying he could have come back to life right then and there, instead of being taken down from the cross and buried for LESS than three days and rising without anyone but his followers seeing him afterward. He could have died and then rose right on the cross, with light enveloping him and his limbs freeing themselves from the torture stake. He could have "come down" and partly fulfilled his failed prophecy of "this generation" seeing "the Son of man coming in the clouds with great power and glory" by then rising into the clouds and coming back down again before meeting with his disciples and leaving again until the second coming.

Would there not then have been contemporary historical reports of the resurrection, reports outside the religious documents of the gospels?

If Christianity were true, we might also expect other things, like the passage in Mark 16 (not in the oldest manuscripts, but that's not the point) that says:

And these signs will follow those who believe: In My name they will cast out demons; they will speak with new tongues; they will take up serpents; and if they drink anything deadly, it will by no means hurt them; they will lay hands on the sick, and they will recover.”

actually being witnessed among believers (and no, Appalachian snake handling churches don't count) to this day.

Everyday occurrences of ordinary believers laying hands on the sick and having the sick instantly healed (having the power would be a sign that you were really saved) would be a constant, continuing proof that Christianity is the true religion and that all the others are phony baloney.

Further, how about when you ask Jesus into your heart, you actually see him in the flesh, just like old Doubting Thomas? How many ex-Christians would there be then? You could fall on your knees like in a Chick tract, only instead of just a feeling, you'd see Jesus and talk to him right there! Unbelieving mockers around you would see nothing, and think you'd gone crazy, but you could have them say the sinner's prayer and see Jesus too. Many people continually testifying to the same thing over and over would get even the most hardened skeptic to consider doing the same just to prove whether it was real or not.


Of course, the above could only happen in a world where Christianity was not a delusion.

Email ThisBlogThis!Share to TwitterShare to FacebookShare to Pinterest
Labels: Christianity