Posted by Nick
"I can't die. It would ruin my image."-Jack LaLanne

Jack LaLanne has left us, after 96 years and decades of health and fitness advice and encouragement. He did some amazing things in his life, even into his golden years, and what an amazing and productive life he lived. I don't know if he'll be remembered beyond the memories of the generation that remembers his television show, The Jack LaLanne Show, which went national in 1959 and lasted a total of 34 years on the air, though he deserves to be. He certainly changed more lives and made more lives at least a little better by raising awareness of healthy living, than his much more famous or celebrated contemporaries. 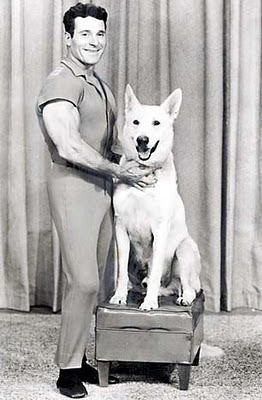 Jack LaLanne is the one on the left

Within my lifetime, I recall people like LaLanne being referred to derisively as "health nuts". It's funny how the fringe ideas of one generation become the common wisdom of later generations. People today are much more conscious of the nutritional merits of things like whole grain products versus refined white flour, for instance, and even the major food companies, which produce so much processed junk food, cater to those with healthier eating habits.

The story goes that young Jack was a "sugarholic" and suffered various aliments, including headaches and depression. That was when he went to hear Paul Bragg, a pioneer in the field of nutrition, speak, and it changed young Jack's life. He gave up white flour and most sugar. He ate raw vegetables and exercised. And, in his early 20s, opened a club that had a gym, juice bar and health food store. This was in 1936. He would soon have dozens of such health clubs across the country.

LaLanne continued doing astonishing physical feats into his senior years, including swimming for over a mile while towing 70 row boats on his 70th birthday.


Many of you may only know of him from his recent infomercials promoting his juicing machine, the Power Juicer (which I own, by the way, and have been putting to good use making myself carrot/celery juice every week), but his influence was felt far beyond that limited commercial venture, and he is a great example of a life lived to its fullest, and with true happiness and purpose. He will be missed.