Jack and the Juicer

Posted by Nick
I didn't mention this when I wrote my Jack LaLanne tribute. I didn't want to bring it up right after the man had just died, but the very next day my Jack LaLanne Power Juicer broke! 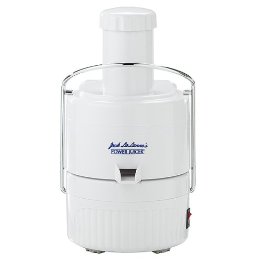 Yep, that's my juicer (or was, it's in the garbage can outside, now). We've had it for a couple years, but it was in storage up at the old winter homestead (if I remember rightly) and had NEVER been used (bought it from the damn infomercial and put it away and forgot about it). Then just weeks ago, I had the opportunity to take a road trip and visit the old place. There, amongst the clutter, was a box that had never been opened. As I'm currently on one of my periodic health kicks, I took it back home with me and for the last couple of weeks have been buying enormous amounts of raw carrots and celery from Sam's Club and juicing them every week (hey, it's cheaper than buying carrot juice from the store). So, there I was, having just written and posted about the legendary Jack LaLanne, when my juicer stops dead right in the middle of a new formula I was trying out that had spinach added to it for extra Popeye power! (that exclamation point is not for the whole sentence, just for the Popeye power!).

At first I thought it was just another carrot jammed the wrong way down the hole, but no, there was nothing there. Thinking maybe I'd overheated it with my enthusiastic juicing, I unplugged and waited for a bit. When I returned for more POWER JUICING! however, it still wasn't working. I tore the thing apart and discover the thingamabob below the blade had broken. It had a huge split and was cracked beyond repair. Made out of plastic, naturally. Why don't they make a part like that out of metal?


I was so enjoying my regular juicing, but the juicer is now out of warranty. I would have written an angry letter to LaLanne himself, but he cheated me out of that pleasure by dying.