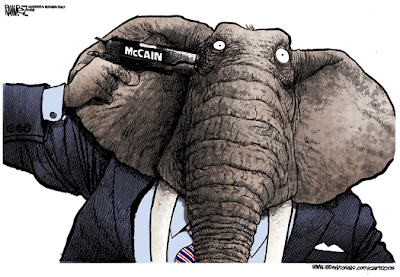 Well, our long national nightmare is over, and I refer to both the endless presidential campaign and the horrors of the Bush administration. If McCain had somehow been able to pull off a victory we would have surely faced at least four more years of war and even "other wars", in McShame's own words. We would have looked forward to continued total disregard of civil liberties and the continued expansion of executive power (which, after all, the right no longer fears as long as a good patriotic Republican is in the oval office fighting those evil terrorists and keeping us safe, you betcha). But the economy, and the unpopular Iraq fiasco, and the weariness with the idiot-in-chief, could lead to no other result than what we witnessed on election night. 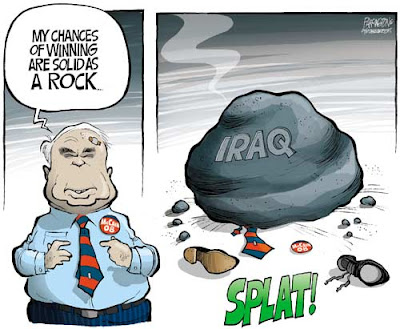 This election was a referendum on John McCain's brand of enthusiastic interventionism and his volcanically warlike temperament, and it was a stunning repudiation of both. Iraq, Iran, the wilds of the Caucasus – what was distinctive about the McCainiac foreign policy was the wide range of his potential targets. Al-Qaeda often seemed to take second or even third place on his enemies list, with the Iranians and the Russians taking first and second respectively.
- A Mandate to End the War

On the issue of civil liberties, the question is, will things improve under an Obama presidency? This is one area where "liberal" judges would be a blessing, so let us hope President Obama appoints a few who stand up for the individual against the awful and terrifying police powers of the state. Lew Rockwell explores these questions in an interview with Judge Andrew Napolitano, an analyst for Fox news and author of A Nation of Sheep

It's hard to believe that the record could get worse than it was under Bush.

I would like to think that President-elect Obama, as a lawyer, as a constitutional scholar, as a professor of law at the University of Chicago (where respect for individual liberties I know is taught in the law school) I hope would have a healthier respect for the Constitution than John McCain would.

Lew: We can certainly hope that things like the Military Commissions Act and all the rest of the horrible tyranny that Bush undertook and that have been repudiated in this election, I mean this election is in fact a defeat of George W. Bush much more so than McCain.


Judge Napolitano: In terms of the Military Commissions Act, that's a good example, because Barak Obama not only voted against it, he argued against it on the floor of the United States Senate. Those powers (of the MCA) are truly dictatorial... which gives the President the power to incarcerate after acquittal. There's no other act, anywhere in the history of western law, in fact I don't even know anything like it the history of law anywhere on the planet, that would allow the prosecuting entity to incarcerate the defendant after the court has found the defendant not guilty. But that Military Commissions Act of '06 does give the President the power to do it. 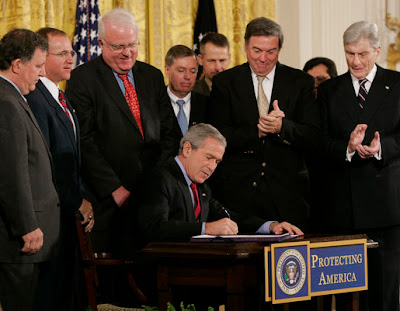 Of course, Obama will inevitably disappoint, especially those among his most devoted followers. 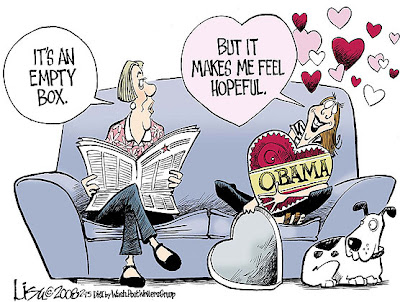 How could he not, with expectations so high and virtual messiah status conferred upon him. We can hope, but I fear not for much. I did not vote this time, in fact I stopped voting after 2000, when Bush the younger failed to pan out (a more humble foreign policy and all that) but I did root, for as with a football game, it's just more fun that way. Besides, the election of McSame would have rewarded the Republican party, and after all that rotten shell of stinking neocon refuse has done to the country these last eight years, that could not be allowed to happen. And so we enter the age of Obama. Out of the starting gate it does not look too good, with the appointment of Rahm Emanuel as chief of staff.

Emanuel, with Pelosi's blessing, famously blocked antiwar Democrats from running for the House in 2006 (he controlled the money for new candidates). Emanuel is an advocate of endless war in the Middle East. No chickenhawk, during the Gulf War, he volunteered as a civilian worker for the Israeli army. source.

Still, it is going to be a relief after the nightmare of the Bush years. For a few months, anyway.
at 10:44 AM