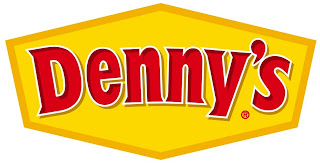 I treated my mom to breakfast recently, asking her where she wanted to go. She couldn't decide between IHOP and Cracker Barrel, so I suggested Denny's as the compromise, figuring the Grand Slams would be the best deals for breakfast (although Cracker Barrel has some really good prices on a larger variety of breakfast dishes). Mom was okay with it, but under her breath I thought I detected the words crepes and rooty tooty.

We entered the restaurant and I noticed a small sign on the glass door, something about an express slam served weekdays (this was a Thursday) for only 4 dollars. That's an even better deal, I thought to myself, before mentioning it to my mom. Of course I also snuck in a quick subliminal comment about my financial situation at the same time. We were seated by a waitress with a slight accent, a tall woman who didn't seem that happy with her work. My mom started off by asking about the notice on the door, mentioning to our server the words 4 dollars and slam, while also pointing in the direction of the entrance. The waitress stated matter-of-factly that that deal ended at 11am. "Oh, said Mom, "so we just missed it" (it was 30 seconds after eleven by my highly accurate atomic watch).

We ended up ordering regular full priced slams and spending over 16 bucks (instead of a more frugal eight or so), but I had a nagging feeling that something wasn't right. After excusing myself for a quick trip to the rest room (which was out of towels) I went to the front door to investigate before returning to the booth. The sign said the express slam deal for 4 bucks was Monday through Friday, 5 a.m. to 4 p.m. I decided it wasn't worth it to complain. Mom was already lecturing about the "awfully high" prices on the menu ("eight dollars for a hamburger, you can get a whole meal of roast beef, turkey, chicken, tons of sides and dessert for the same price at Golden Corral") and wistfully mentioning her love of powdered sugar, crepes and the sickeningly sweet pancake choices offered by IHOP. "And you know," she said, "how good and inexpensive breakfast is at Cracker Barrel."

Next time, Mom, I promise.