Stick it to The Man Whenever You Can 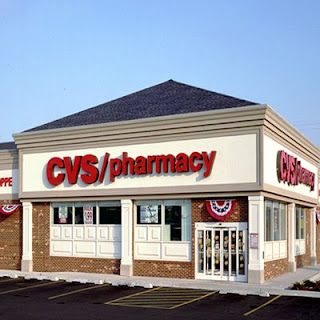 Went to the local CVS pharmacy to pick up a prescription. Walked down the aisles just browsing with D. D wanted to show me the liquor gift boxes, but though they were kinda nice and colorful , I wasn't looking to pay that much for a pretty box. Then we strolled down the regular liquor aisle. I spotted Hiram Walker Blackberry Brandy for only $5.47. Not something I would normally buy, but I didn't want to shell out a lot of money for a bottle of liquor at that moment, and since D wanted some, well, why not? The price was right anyway.

After a little more browsing, including the Christmas items and candy, we went to the cash registers to pay for the one item, that bottle of brandy. After scanning it (and yes, a CVS savings card was presented to the cashier) we were told it would be over eight dollars in total. Wait a minute, I said, it said 5.47 over in the spirits section. A man was sent to verify, and I headed there myself as well. I knew the price I'd seen had to be correct. I've been very careful to double check after numerous checkout lane incidents of this sort. As I approached the shelf where the blackberry brandy was located the CVS guy was already there, bending down to investigate. I took a closer look myself at the same time. That's when I noticed it. Although nothing but Hiram Walker Blackberry Brandy was anywhere in the vicinity of the 5.47 price marker, the tiny print on the tag indicated that sale price was for another product. I reached my conclusion quicker than CVS guy. You know, I told him as he looked at me stunned , you need to put the right product over the right price. I walked away. He finally showed up at the counter as we were about to leave. Sometimes, he said, they keep changing their mind on where to place the items and they get put with the wrong pricing. Yeah, sure, buddy, and I've got a nice used car to sell you, runs good, you won't regret buying it. Turned out the guy was a manager, but instead of apologizing or offering us something for our inconvenience, he just let us walk out the door.

I wonder how many people never discover they were over charged for a particular item in this manner? Thinking they were paying the "sale" price, they were instead charged the full amount, and just didn't notice it among all the other items they purchased at the same time. If you are a retail store and steal from your customers like this, it's just an "innocent mistake", but if you're just some rube and walk out with an item under your jacket that you failed to pay for, you're a criminal. That's how the crapitalist system works.

Later that same day Wal-Mart overcharged me for a bag of Fritos by about 90 cents (and no, I did not make a mistake this time). It was okay though, I lived with it. You see I had a case of bottled water in my cart. I mentioned it first thing to the clerk and she nodded in response (these clerks now ask you NOT to put your big heavy items up on the checkout conveyor) and so naturally I assumed she got it included on my receipt. Out in the parking lot I took a look at the receipt. Everything seemed in order, until...damn, the corn chips! Then I couldn't find the water on there. Free water, I guess, I said aloud. Well, that makes up for the chips and a few other things I've been overcharged for.

I turned. It was a short man, almost little people size but not quite.

"Yeah," he continued, "happens to me all the time. Did you happen to have a male or a female clerk at your lane?" Who the hell was this guy?

"Oh?" he lifted his brow. "Did you buy any embarrassing type items? You know, cause the lass to blush?"

I started putting my bags in the trunk.

"I always get free stuff when I go to the 99 cents store," he said. "Leave a few things in the cart, then throw a dollar box of condoms on the counter. I make sure to have a lecherous look on my face as well, of course. It works most of the time, for me anyway. Always stick it to the man whenever you can, I say."

I was almost done unloading my cart.

"Course lube or a naughty magazine works sometimes too. I see you've got something like it there, some petroleum jelly."

"Whatcha gonna do with it?" he asked.

"You see those bottles of water I wasn't charged for?"

"Yeah," he replied, a bit puzzled.

"It's for you so you can take those bottles and shove them up your ass."

Email ThisBlogThis!Share to TwitterShare to FacebookShare to Pinterest
Labels: The Man