Posted by Nick
I don't feel much like writing. There are days like that, and sometimes days and days. String them together and you don't see any new posts appear here for a almost a week sometimes. Sometimes I am in the mood but can't get to a computer. Other times I sit and have more ideas than I know what to do with, but can't get the words out, or I just feel too tired after working all day. It makes one long for a paradise...

1978. We were living at the Rosebud apartment complex, second floor. We had driven down from Washington in a 1969 Cadillac Fleetwood Brougham, purple with a silver padded vinyl top. My mom loved that car, though earlier that year I had thrown a rock at the front fender, putting a big dent in it. That had been in response to her running over my cat Rascal, a fat Siamese that had been delivered to me one night by two school friends. They were feeding him hot dogs and recommending I take him off their hands, which of course I did, since adding one more cat to my collection of nine or so didn't make much of a difference;maybe no one would notice I had a new one. Anyway, one day Rascal (a bad luck name, as my previous Rascal had died from distemper) was enjoying the sun while rolling his roly poly self around the driveway. Mom decided to go for a drive, probably up to the store, and she backed over him. I heard yelling from outside and ran out to see the horror. Mom was still in her car, in the street now, with Rascal flopping about on the driveway, his head down, the rest of him convulsing wildly, going in circles. Dad was soon by my side. My first thought was we needed to rush Rascal to the vet, but dad knew better, and it was all over seconds later. We buried him at the side of the mobile home.

The last third of that year saw a major plane crash (PSA flight 182) and the deaths of Pope Paul VI and Pope John Paul I. But the most shocking event was the mass suicide at Jonestown, Guyana. Back in 1978 there was no cable news, no internet. Just the big three networks (CBS, NBC, and ABC) and the local newspaper and local TV news. 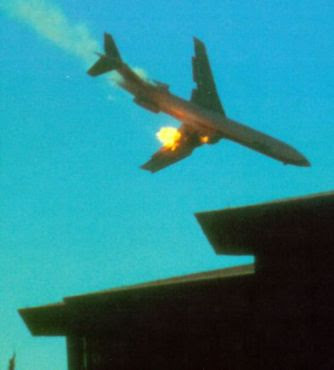 PSA Flight 182, falling from the sky over San Diego, California

NBC News reports on the events at Jonestown in the videos below. At first it was believed that only 383 lives had been lost and the rest of Jim Jones' followers in Guyana had fled into the jungle. The sad truth would soon be revealed. Over 900 had died that tragic day 30 years ago, November 18th, 1978.