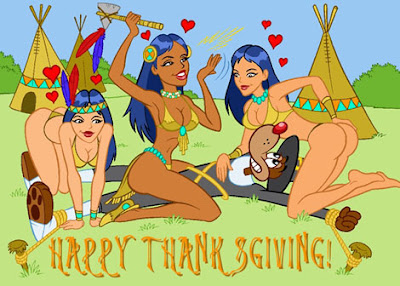 I asked my mom the other day if she had any true Thanksgiving stories from her childhood. No, she said. I couldn't believe this was true. She's told stories of black servants refilling lemonade glasses for her and her family in the summer heat of Tennessee, of encounters with water moccasins in the swamps of Florida where she and her sister would play for hours, and many other detailed tales. But no memories of Thanksgiving?

"I really don't remember anything, no memory of dad carving a turkey or anything like that at all".

As for myself, I seem to remember many Thanksgiving dinners at restaurants. We kids (my sister and I) liked it fine, if it was one of those fancy places where you could go and get turkey, ham and roast beef at the carving station, have unlimited drinks (soft drinks, I mean) and have an abundance of dessert choices presented to you at the end. As time passed and I got older, things changed. Some years I was with friends, or just a family member, like the year my dad and I cooked a turkey and had our feast with no one else at the table (well, actually, no table was involved, we ate in the living room while watching TV). There was even the unfortunate year when my Thanksgiving meal looked like this: 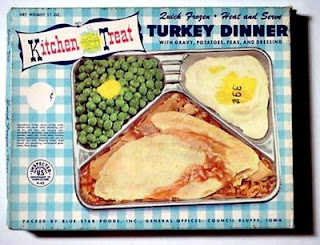 There must be many sorts of Thanksgivings out there. I hear the Salvation Army puts on a good dinner with all the trimmings. Then there are always those that choose ham instead of turkey for the big meal.

I do remember a few Thanksgiving dinners where it was announced "We're having ham this year" and being very disappointed, not that I don't enjoy ham, but turkey is it on Thanksgiving.

Then there was that strange year, the one where my little nephew was staying with my mom. She had a big bird in the oven, and it all seemed to be going fine, until it started to stink. I mean, it was awful. My nephew (you know how kids talk) said it smelled like dirty diapers. I have to admit, it did smell like crap. The whole house soon filled with the unbearable odor. Mom kept denying there was anything wrong, until it became too much even for her nose. The turkey went into the trash can outside and we had Thanksgiving Italian style in its place.

Who knows what other kinds of dinners are served on the holidays in this great land of ours. 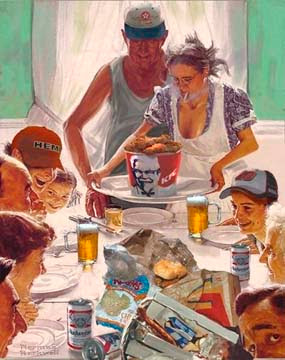 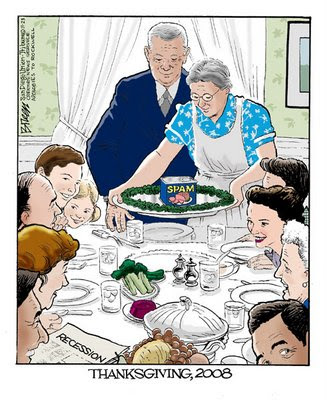 Spam demand has factory working overtime.
at 12:01 AM