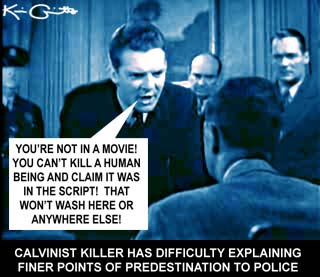 Paul, in speaking of God, says, "Therefore hath He mercy on whom He will have mercy, and whom He will He hardeneth. Thou wilt say, why doth He yet find fault? For who hath resisted His will? Nay, but who art thou, O man, that repliest against God? Shall the thing formed say to Him that formed it, Why hast Thou made me thus? Hath not the potter power over the clay of the same lump, to make one vessel unto honor and another unto dishonor?"

I shall leave it to Calvinists and Universalists to wrangle about these expressions, and to oppose or corroborate them by other passages from other books of the Old or New Testament. I shall go to the root at once, and say, that the whole passage is presumption and nonsense.

Presumption, because it pretends to know the private mind of God: and nonsense, because the cases it states as parallel cases have no parallel in them, and are opposite cases.

The first expression says, "Therefore hath He (God) mercy on whom He will have mercy, and whom He will He hardeneth." As this is ascribing to the attribute of God's power at the expense of His justice, I, as a believer in the justice of God, disbelieve the assertion of Paul. The Predestinarians, of which the loquacious Paul was one, appear to acknowledge but one attribute in God, that of power, which may not improperly be called the physical attribute. The Deists, in addition to this, believe in His moral attributes, those of justice and goodness.

In the next verses, Paul gets himself into what in vulgar life is called a hobble, and he tries to get out of it by nonsense and sophistry; for having committed himself by saying that "God hath mercy on whom He will have mercy, and whom He will He hardeneth," he felt the difficulty he was in, and the objections that would be made, which he anticipates by saying, "Thou wilt say then unto me, Why doth He (God) yet find fault? for who hath resisted His will? Nay, but, O man, who art thou, that repliest against God!"

This is neither answering the question, nor explaining the case. It is downright quibbling and shuffling off the question, and the proper retort upon him would have been, "Nay, but who art thou, presumptuous Paul, that puttest thyself in God's place?"

Paul, however, goes on and says, "Shall the thing formed say to him that formed it, why hast thou made me thus?" Yes, if the thing felt itself hurt, and could speak, it would say it. But as pots and pans have not the faculty of speech, the supposition of such things speaking is putting nonsense in the place of argument, and is too ridiculous even to admit of apology. It shows to what wretched shifts sophistry will resort.

Paul, however, dashes on, and the more he tries to reason the more he involves himself, and the more ridiculous he appears. "Hath not," says he, "the potter power over the clay of the same lump, to make one vessel unto honor and another unto dishonor?"

In this metaphor, and a most wretched one it is, Paul makes the potter to represent God; the lump of clay the whole human race; the vessels unto honor those souls "on whom He hath mercy because He will have mercy"; and the vessels unto dishonor, those souls "whom He hardeneth (for damnation) because He will harden them." The metaphor is false in everyone of its points, and if it admits of any meaning or conclusion, it is the reverse of what Paul intended and the Calvinists understand.

In the first place, a potter doth not, because he cannot, make vessels of different qualities, from the same lump of clay; he cannot make a fine china bowl, intended to ornament a sideboard, from the same lump of clay that he makes a coarse pan, intended for a close-stool. The potter selects his clays for different uses, according to their different qualities, and degrees of fineness and goodness.

Paul could not have hit upon a more unfortunate metaphor for his purpose, than this of the potter and the clay; for if any inference is to follow from it, it is that as the potter selects his clay for different kinds of vessels according to the different qualities and degrees of fineness and goodness in the clay, so God selects for future happiness those among mankind who excel in purity and good life, which is the reverse of predestination.

In the second place there is no comparison between the souls of men, and vessels made of clay; and, therefore, to put one to represent the other is a false position. The vessels, or the clay they are made from, are insensible of honor or dishonor. They neither suffer nor enjoy. The clay is not punished that serves the purpose of a close-stool, nor is the finer sort rendered happy that is made up into a punch-bowl.

The potter violates no principle of justice in the different uses to which he puts his different clays; for he selects as an artist, not as a moral judge; and the materials he works upon know nothing, and feel nothing, of his mercy or his wrath. Mercy or wrath would make a potter appear ridiculous, when bestowed upon his clay. He might kick some of his pots to pieces.

But the case is quite different with man, either in this world or the next. He is a being sensible of misery as well as of happiness, and therefore Paul argues like an unfeeling idiot, when he compares man to clay on a potter's wheel, or to vessels made therefrom: and with respect to God, it is an offense to His attributes of justice, goodness, and wisdom, to suppose that He would treat the choicest work of creation like inanimate and insensible clay. If Paul believed that God made man after His own image, he dishonors it by making that image and a brickbat to be alike.

The absurd and impious doctrine of predestination, a doctrine destructive of morals, would never have been thought of had it not been for some stupid passages in the Bible, which priestcraft at first, and ignorance since, have imposed upon mankind as revelation.

Nonsense ought to be treated as nonsense, wherever it be found; and had this been done in the rational manner it ought to be done, instead of intimating and mincing the matter, as has been too much the case, the nonsense and false doctrine of the Bible, with all the aid that priestcraft can give, could never have stood their ground against the divine reason that God has given to man.

Doctor Franklin gives a remarkable instance of the truth of this, in an account of his life, written by himself. He was in London at the time of which he speaks. 'Some volumes,' says he, 'against Deism, fell into my hands. They were said to be the substance of sermons preached at Boyle's lectures.

"'It happened that they produced on me an effect precisely the reverse of what was intended by the writers; for the arguments of the Deists, which were cited in order to be refuted, appeared to me more forcible than the refutation itself. In a word I soon became a perfect Deist." - New York edition of Franklin's Life, page 93.

All America, and more than all America, knows Franklin. His life was devoted to the good and improvement of man. Let, then, those who profess a different creed, imitate his virtues, and excel him if they can.


The Calvinist God is Evil! 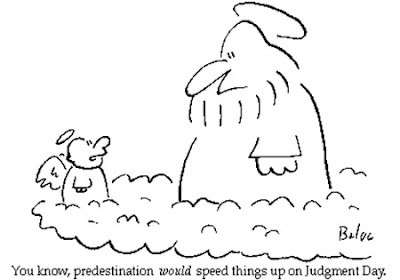