Yet somehow I get the feeling that there won't be any Secret Service investigation. Imagine if it was a Republican or "right-winger" making the threat, though.
As Election Day nears, Obama supporters step up riot threats
Meanwhile, Sick fuck and asshole Bill Maher seems to encourage moronic blacks (most of them-the evidence? their support for Obama: see more below)... Bill Maher Warns Romney Supporters: 'Black People Know Who You Are and They Will Come After You' 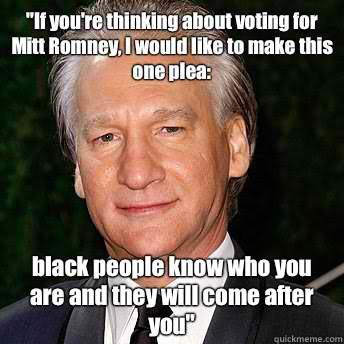 And if you're planning on being Bill Maher for a while longer, hopefully no one comes after you, cause everyone really knows who you are...
Very Stupid Black People

...the ascent of America's first black president has coincided with the one of the steepest descents of the economic fortunes of black Americans since the second world war both in real terms and relative to whites.-Barack Obama and the paradox behind his African American support base

Actually, the truth is, blacks are just far more racist than whites.
at 9:18 PM