Will You Join Me For Tea?

Posted by Nick
Will you join me for tea and also for this new SE series Will You Join Me For Tea? Good, I thought so. Today I'm having just Lipton black tea. I really do need to get me a tea kettle again, but for now I just grab my mug and heat some water in the microwave. I get my teabag out, place it in the hot water (on my microwave I don't use the "beverage" setting, I just nuke it for two minutes and thirty seconds). I don't really eat cookies anymore, or scones, crumpets or other such gluten laden junk. They are nice with tea, and I admit to being tempted by those Scottish butter cookies (damn, they're good) but I'm sticking to my plan and consuming candy with my tea instead, which I'm sure you'll agree is much healthier. I picked up the habit of having candy, mostly in the form of some kind of chocolate, from my Afghan ex-girlfriend whose mother served me green tea on every visit. I looked forward to the tea (her mother only used loose leaf, not bags) and the plate of chocolate, including many varieties of dark chocolate, she served with it. It's a habit that has stuck with me long after the break-up when she married some dude from Australia, and I mean my old girlfriend, not her widowed mother. Today's candy is Cup-o-Gold, and for you unfortunate East coasters, you won't likely find it in your stores. It's distributed by Adams & Brooks in the city, Los Angeles California, my name is Friday, I carry a badge, oh wait, sorry, been watching too many episodes of Dragnet on Netflix. Anyway, just the facts from now on, ma'am, okay? Here's what the wrapper of a Cup-o-Gold looks like: 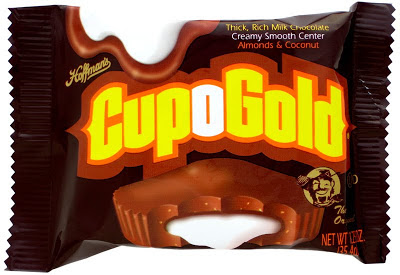 It has a marshmallow type center (that white stuff you see -get your mind out of the gutter, sicko, it is marshmallow) and has almonds (though not whole ones, more like crushed almonds or something) and coconut (though not like the coconut that you would find in an Almond Joy bar, and as I mentioned, not the same form of almonds). No, the Cup-o-Gold (much larger than a peanut butter cup, by the way) is like a more sophisticated Almond Joy, but with marshmallow filling added. I had one with tea just now, and I had one last night, too. I was going to save this one for tonight, but afternoon tea time was calling me, so what could I do? Now, however, I am all out of Cup-o-Golds? whatever shall I do? Will you join me, perhaps, for tea later? And bring some candy with you for chrissakes!
at 1:16 PM