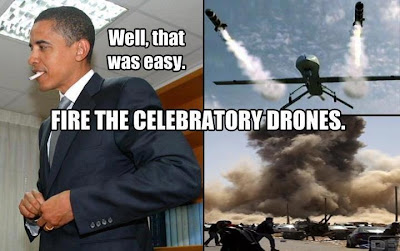 The drone war violates both domestic and international law, and the Obama administration’s vehement disdain for transparency in government is the only thing keeping it from public and legal scrutiny. Beyond the law, it’s terrorism.-Obama Bombs Yemen Hours After Winning Reelection I hope Beyonce, Jay-Z and Bruce Springsteen are proud of themselves for supporting this murderous monster.

ISLAMABAD (Reuters) - The roars celebrating the re-election of U.S. President Barack Obama on television give Mohammad Rehman Khan a searing headache, as years of grief and anger come rushing back. The 28-year-old Pakistani accuses the president of robbing him of his father, three brothers and a nephew, all killed in a U.S. drone aircraft attack a month after Obama first took office. "The same person who attacked my home has gotten re-elected," he told Reuters in the capital, Islamabad, where he fled after the attack on his village in South Waziristan, one of several ethnic Pashtun tribal areas on the Afghan border. "Since yesterday, the pressure on my brain has increased. I remember all of the pain again."-Obama victory infuriates Pakistani drone victims 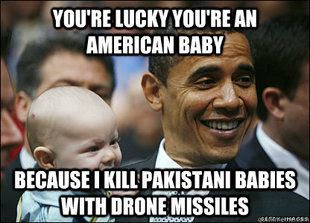