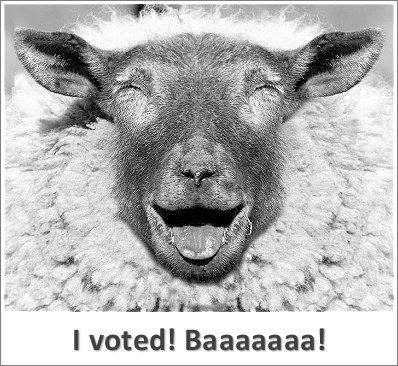 Fools! Oh, I used to be so proud to stick that stupid little oval "I voted" sticker on my shirt after voting. What's amused me so much this year is the morons standing in line for hours (in some early voting that I saw on television, for up to NINE hours!) to cast one vote. Do you really believe, sheeple, that your one insignificant vote matters at all? Even dumber were the idiots proclaiming how "sacred" their vote and voting is, to which I can only reply, "what bullshit!" Voting is a complete waste of time. For the individual it makes no logical sense. And those lines? Hilarious. Watching the ritual of the religion of the state being carried out by millions of fools is terrifying. There's' nothing uplifting or inspiring about it. It only confirms my belief that anyone waiting for more than a few minutes to cast a ballot is too mentally deranged to be making any decision on the makeup of the governemnt. Buying into the propaganda of the state that you must vote (in order not to exercise your "democratic" rights , but to give legitimacy to your masters) shows how easily the population is manipulated and how firmly it is under the control of the ruling class. The early voting thing is ridiculous as well. Just 20 years ago, in 1992, only about 7% of votes were cast before election day. This year it's likely to go over 30% or more. But you heard people in line in early voting states saying with straight faces that their rights were being violated. Have you intellectually dishonest fools ever heard of voting on the actual day of the election? How retro and old school! Seriously, who are these people and what is so different about Tuesday as opposed to Monday (some were still voting early yesterday). Absentee or early voting used to be generally reserved for those who legitimately wouldn't be able to make to the polls on election day. But the Obama mentality has turned the citizens into whining babies with apparently no reasoning ability. One reason for the long lines at early voting locations? There are fewer of them, not the full number of polling places you'll see on the day of the election. Again, bunch of morons. One liar "commentator" on cable news even suggested that the early voting waits of hours were the equivalent of "poll taxes"! Dear God, please put this country out of its misery!
at 9:36 AM