Posted by Unknown
While not the last contests before Super Tuesday on March 6th (Washington has a Caucus on March 3rd), Michigan and Arizona are the most important contests since Florida.

Some are saying Michigan will be a hard fought, make-or-break state for Romney, but this is largely coming from news media that has been trying desperately throughout the nomination process to make this appear like a real battle. Yes, Romney is from Michigan, and yes his father was the governor, but Michigan is not going to go to the Republicans in 2012 anyway (just as Massachusetts won’t, either).

Santorum always polls well in the Midwest, which is full of people who eat up Santorum’s brand of invasive theocracy. I’m from the Midwest, and I can tell you, the people there (especially the conservatives) are decades behind the times, so Santorum’s fag-bashing, woman-hating, Bible-thumping rhetoric hits home for these inbred, ignorant products of white-flight.

It’s entirely possible at this point Romney will still win Michigan, however, especially given the new alliance he has with Ron Paul. There’s nothing like conspiracy theories about the candidate adored by conspiracy theorists. Ron Paul has conveniently not attacked Romney, while Romney has all but ignored Paul (making one off-handed remark in January about how “one candidate” will do anything to avoid war with Iran).

Paul’s cult following blubbers on about how this just couldn’t be true of their savior, but their Dear Leader’s son, Rand, is already talking about how “it would be an honor to be considered” for Romey’s VP slot. There’s also talk of Ron Paul himself angling for a cabinet position in back room deals that have resulted in Paul’s Super-PACs attacking Santorum using the same rhetoric and language as the Romney campaign.

Personally, I’m skeptical. Why would Ron Paul be working so closely with Mitt Romney? I mean, Mitt is a horrible guy and all, but he’s no white supremacist.

While I still think Romney can win Michigan through brute force of advertising alone, he shored up his lead in Arizona this week when he picked up an endorsement from Gov. Jan Brewer in Arizona (pictured below, reacting to the knowledge that her state used to be Mexico). 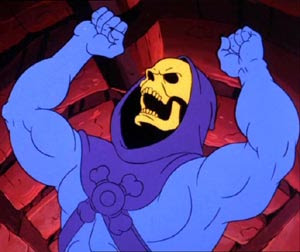 You may remember Skeletor from an incident recently when she encountered Obama on the tarmac after he got off Air Force One. She chose that time to ask him if he realized that in Arizona, the sky was falling: 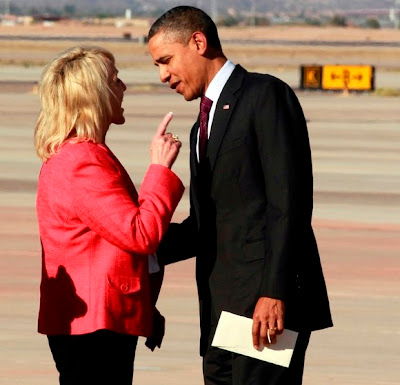 Above, Obama is in the middle asking “What the fuck are you talking about?”

Gingrich is still in it, hoping for a win in Ohio and Georgia on Super Tuesday. His continued presence has all but assured Romney’s nomination. The “Not Romney” vote has been spread thin and unevenly, with different regions of the country favoring one candidate over the other (and Ron Paul continuing to win nothing except a lot of high-fives from frat boys who don’t even bother to vote).

Even if every single race Romney has lost had been won by the same candidate, it would still be an uphill climb for them to beat Romney. Romney has been playing for keeps since day one, and his efforts towards winning big on Super Tuesday will pay off spectacularly if he can pick up a large bloc of states.

How important is Super Tuesday? Well, take everything we’ve done so far… and add about 25%. If you count all contests prior to Super Tuesday (including Michigan, Arizona and Washington), there have only been 345 delegates up for grabs (and many of these were non-binding causes and primaries). Super Tuesday constitutes states totaling 437 delegates.

It’s like a game show where the first few rounds don’t even matter, because so many points are awarded in the “lightning round.”

While it’s a little early, I can start making predictions. If Gingrich wins Ohio or Georgia, he’ll be in it a while longer, but if he loses both, expect him to make his exit. Depending on his results tomorrow and on Super Tuesday, Santorum could also depart from the race, especially if he keeps talking publicly (basically every other speech he delivers results in a 1% point fall in his poll numbers).

Santorum can’t coast forever on Iowa, Minnesota, Missouri and Colorado, and he needs a real win with assured delegates. So far, Santorum’s wins have provided him with little more than momentum, which he has squandered by publicly opining on religion and uteruses. It’s almost as if he forgot he’s running for President of the United States, not Pope, and that there’s a general election where he has to actually appeal to voters who are not foaming at the mouth for Jesus.

Paul is poised to continue his low budget assault on all non-Romney opponents. It has become clear Paul’s goal is largely to try to set the stage for libertarianism and his son in the future, as even Paul’s supporters are slowly coming out of their drug-induced fog of blind hope regarding his actual prospects in the race. With Paul’s apparent strategy of gaming the delegate system quickly unraveling, not even the most optimistic Paul-ophiles have any business pretending he is anything but an attention whore at this point.

Still, Super Tuesday may see Paul’s first state win. Paul has an outside chance of winning Alaska, which is a state he polls well in. Alaska will also be decided by a caucus, a format he tends to do disproportionately well in. He also has hopes for performing well in Vermont, Idaho, North Dakota and, of all places, Virginia, where it will just be him and his co-conspirator, Mitt Romney, on the ballot.

Stay tuned tomorrow night, when I’ll blog the results of the primaries, and I’ll make a special announcement about an event I have planned for Super Tuesday…
at 10:32 AM