Posted by Unknown
By Sara Robinson
Courtesy of Alternet 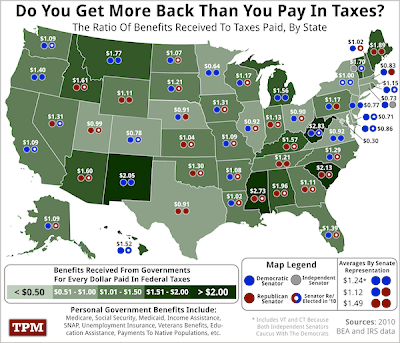 Progressives believe in the redistribution of wealth, so we're not usually too upset by this state of affairs. That’s what it means to be one country. E pluribus unum, and all that. We’re happy to help, because we think we’ve got a stake in making sure kids in rural Alabama get educations and seniors in Arizona get healthcare. What’s good for them is good for all of us. We also like to think they’d help us out if our positions were reversed. It’s an investment in making America stronger, and we feel fine about that.

But maybe it's time to admit that we're being played for chumps, and that there are people in the rest of the country who are taking way too much advantage of our good nature. After all: it's now a stone fact that the blue states and cities are the country's real wealth creators. That's why we pay more taxes, and are able to send that money to the red states in the first place. We're working our butts off, being economically productive, going to college, raising good kids, supporting reality-based schools, keeping our marriages together, tending to our busy and diverse cities, and generally Playing By The Rules. And the fates have smiled on us in rough proportion to the degree that we’ve invested in our own common good.

So we've got every right to get good and angry about the fact that, by and large, the people who are getting our money are so damned ungrateful -- not to mention so ridiculously eager to spend it on stuff we don't approve of. We didn't ship them our hard-earned tax dollars to see them squandered on worse-than-useless abstinence-only education, textbooks that teach creationism, crisis-pregnancy misinformation centers, subsidies for GMO crops and oil companies, and so on. And we sure as hell didn't expect to be rewarded for our productivity and generosity with a rising tide of spittle-flecked insanity about how we’re just a bunch of immoral, godless, drug-soaked, sex-crazed, evil America-hating traitors who can’t wait to hand the country over to the Islamists and the Communists.

Ironically, the conservative movement's favorite philosopher had some very insightful things to say about this exact situation. Ayn Rand's novels divided the world into two groups. On one hand, she lionized "producers" -- noble, intelligent Übermenschen whose faith in their own ideas and willingness to take risks to achieve their dreams drives everything else in society. And she called out the evil of "parasites," the dull, unimaginative masses who attach themselves to producers and drain away their resources and thwart their dreams.

Conservatives love this story. They're eager to claim the gleaming mantle of the producers, insisting loudly that their tax money is going to support people (mostly in blue states and cities, it's darkly implied) who won't or can't work as hard as they do. If you want to arouse their class and race resentments, there are few narratives that can get them rolling like this producers-versus-parasites tale.

But the NYT story and that map up there prove beyond arguing that the conservative interpretation of events is 100 percent, 180-degrees, flat-out wrong.