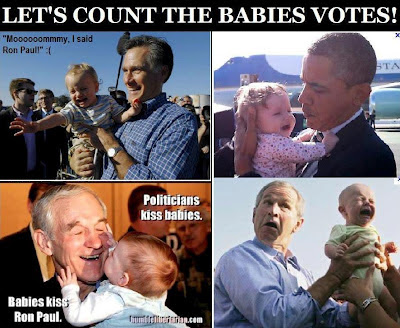 Well, looks as if the babies know what's going on with habitual lying scum. That baby doesn't like Mitt Romney (no one else does either). Obama, well, the baby knows that of those likely to be elected, he's the best of a bad bunch. Baby Bush himself appears to be as repulsed by babies as they are by him (he murdered a lot of innocents in his term of office, so no wonder the mutual dislike).

And finally, it looks like babies are more perceptive than Bret Alan!
at 4:57 AM