Vacations Are A Human Right

This report reviews international vacation and holiday laws and finds that the United States is the only advanced economy that does not guarantee its workers any paid vacation or holidays. As a result, one in four U.S. workers do not receive any paid vacation or paid holidays. The lack of paid vacation and paid holidays in the United States is particularly acute for lower-wage and part-time workers, and for employees of small businesses. This report also includes a comparative appendix with information on paid leave and holiday laws in Australia, Austria, Belgium, Canada, Denmark, Finland, France, Germany, Greece, Ireland, Italy, Japan, the Netherlands, New Zealand, Norway, Portugal, Spain, Sweden, Switzerland, and the United Kingdom

The Right to Vacation: An International Perspective

So, I disagree with The Commentator. Not necessarily with his concerns in a statist context. We certainly don't need more government imposed "rights". But we anarchists exist outside the left/right paradigm, and no one who only thinks in traditional terms really has a grasp of what we are or how we see things.

Let's put it this way: wage slavery is a crime against humanity and it's time to think outside the corporate box called a cubicle. It is also time to recognize that ALL employees are being exploited, and that liberty is not only liberation from the chains of the State (though that's a good place to start), but from all denial of human dignity, including the hierarchy of the statist-capitalist workplace.

In the USA, most workers are very lucky if they are given two weeks of paid vacation a year (and that's ten working days, not actually fourteen days of paid time off), while in most of Europe, average workers get up to five or six weeks of vacation. Believe me, I know I and most of my co-workers would be better and happier workers if allowed a human level of leisure time.

Of course, we would also be better at our jobs if we had a real stake in our livelihood, instead of being nothing but another "cost of doing business" in the books of our capitalist business bosses. 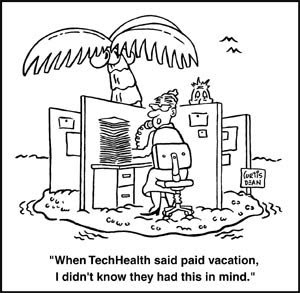 Those cartoons are not far of the mark. To your employer, your time is not your own. They own your time (they paid for it, remember). You're nothing but a commodity called labor.
at 8:07 PM