If Thomas Jefferson Were Alive Today

A "little rebellion now and then is a good thing, and as necessary in the political world as storms in the physical," is one of the better-known quotes of Thomas Jefferson... It's not hard to imagine which side he would take in today's battles over the increased centralization of power in government.

Were he alive today, would Jefferson support the Tea Party movement and others who object to President Barack Obama's health care bill, stimulus programs and increased spending and debt? "Yes," Jack Pitney told us. He's a professor of American politics at Claremont McKenna College. "Jefferson was deeply suspicious of the centralization of power. He was also suspicious of elites, even though he belonged to the educated and social elite of his time."-Thomas Jefferson still shows the way

Yesterday was Thomas Jefferson's birthday (April 13, 1743) and if we really wanted to celebrate what America is supposed to be about, his birthday would be celebrated as a national holiday, and we could then eliminate all the other "Great American" birthday holidays (which reminds me of John F. Kennedy's statement at a dinner honoring Nobel Prize winners: "I think this is the most extraordinary collection of talent, of human knowledge, that has ever been gathered together at the White House, with the possible exception of when Thomas Jefferson dined alone").

Our current ruling elite, including bankster puppet and all-around despot Obama, care nothing for the ideals of liberty on which this nation was founded. As Robert Higgs points out : "What of any consequence remains beyond the state's reach in the United States today? Not wages, working conditions, or labor management relations; not health care; not money, banking, or financial services; not personal privacy; not transportation or communication; not education or scientific research; not farming or food supply; not nutrition or food quality; not marriage or divorce; not child care; not provision for retirement; not recreation; not insurance of any kind; not smoking or drinking; not gambling; not political campaign funding or publicity; not real-estate development, home construction, or housing finance; not international travel, trade, or finance; not 1,000 other areas and aspects of economic and social life."-State's tentacles choke freedom at every turn.

Now the legacy our Great Leader is leaving us and our children is massive debt (a national debt that stands today at $12.6 trillion or $115,500 per taxpayer, with the most recent yearly deficit at about $1.8 trillion, and this is before we even begin to talk about the unfunded liabilities of Social Security and Medicare, which are approaching $80 trillion) which can only lead to a massive collapse. If you divide that total of $90 trillion or so among all 300 million Americans, every man, woman and child owes at least $300,000. And you thought you were out of debt, Mr. and Mrs. Responsible? Don't make me laugh!

If only Jefferson's words had been heeded by Americans when they were voting themselves freebies for so many decades: "Loading up the nation with debt and leaving it for the following generations to pay is morally irresponsible. Excessive debt is a means by which governments oppress the people and waste their substance". 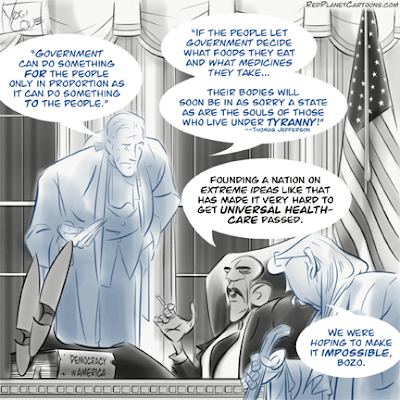