The Sunday Jesus: Jesus on Toast

Posted by Nick
Researchers at Northwestern University say there's a reason why some people have claimed to see familiar faces in their toast.


I wonder if Jesus must return in the form of toast, or on a pancake or something, maybe even in the clouds (as he is supposed to) but not in flesh, but as a cloud! After all, he hasn't shown up now for 2,000 years, so naturally those expecting to see him will be forced to conjure him up out of a thin, toasty slice of bread.

My Mom's mother and sister were quite the Catholic believers, and once, many years ago, they insisted on showing me a "miracle" photograph supposedly taken from an airplane. It was Jesus in the clouds! Well, I wasn't convinced. It vaguely resembled a figure in a robe with arms outstretched, but you had to really stretch your imagination to see Jesus. Nevertheless, my grandmother declared confidently "That's our Lord!"

There seemed to follow a discussion about it being a possible sign that the Lord was returning soon, but it didn't get very far, as I recall, because as Catholics, they didn't really buy into the "we're living in the last days" Late, Great Planet Earth thing. Nor did their behavior indicate any concern on their part that judgment was near, but I won't go into that here. Catholics, after all, have the confessional, so it was pretty easy to be forgiven for almost anything "unchristian".


So, Jesus haunts us on our toast, as reliable a sign of his overcoming of death as that resurrection story in the gospels. I still don't believe it. 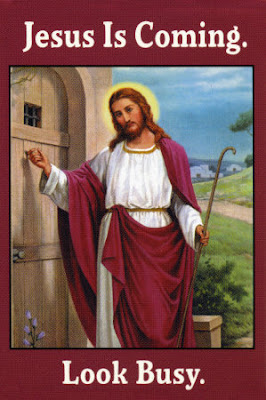 Email ThisBlogThis!Share to TwitterShare to FacebookShare to Pinterest
Labels: Jesus