Question of the Day: Do Libertarians Hate Superheroes?

Posted by Nick
T.C. asks, I only attempt to answer:

Superman and his fascist "patriotism" and support of the cops and the "law", no! Batman and his suspicions about the established order and his operation on the edge of (if not outside) the law, maybe (some interpretations of Batman are more objectionable than others).

I'll have more on this later, and the strange case of Frank Miller. I recently finished a book (Kevin Anderson's Enemies & Allies

) about Superman and Batman set in the 1950s during the cold war. Batman was definitely more "libertarian" in that one than goody two-shoes (related to "Super Cheap"? -see link) Superman.

It may be news to...the majority of readers that Superman, the highly coveted American film hero, is an expression and a creation of fascist minds rooted in a political culture that epitomizes power and the use of force.

This is so, as Superman alters the nature of reality and creates a reality of his own, which defies human understanding and logic. He also violates every rule of physics and all scientific principles known to humanity. The notion of Superman is based on the idea of a battle between "good vs. evil," from an exclusively American perspective, where the battle always demonstrates an external threat to American society and its people.-America Uses Superman to Promote its Fascist Agenda

This is so, as Superman alters the nature of reality and creates a reality of his own, which defies human understanding and logic.

That sounds more like the Christian God to me, but what do I know. 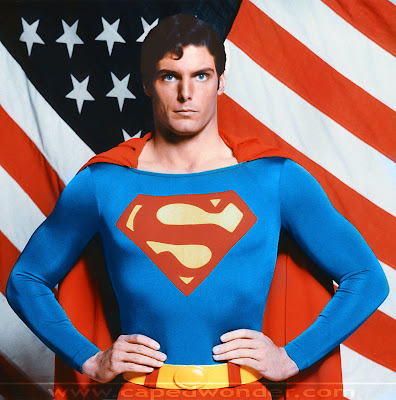 Email ThisBlogThis!Share to TwitterShare to FacebookShare to Pinterest
Labels: questions