Anti-Obama Jokes of the Day

Posted by Nick
With Obama in the White House, what does the beggar's hand-written sign say? 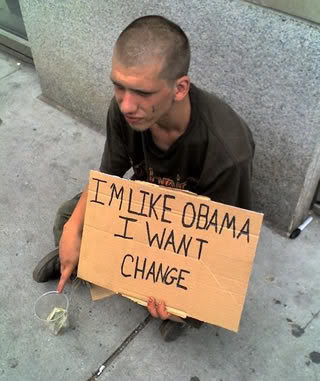 George Washington was the father of our country.

Eh! No big deal. Barack Obama is better...at least in his own mind. Such was the laughably absurd claim of President Obama on 60 Minutes last Sunday. What? You didn't see it? That was because 60 Minutes conveniently left it out of its broadcast.-60 Minutes Broadcast Edits Out Laughable Obama Claim as 4th Best President

Obama selects FDR, Lyndon Johnson, and Lincoln as the top three US Presidents, and all three were total disasters with policies completely destructive of liberty and the Constitution...Good comparison to your disastrous and destructive, liberty destroying administration, Mr. president!