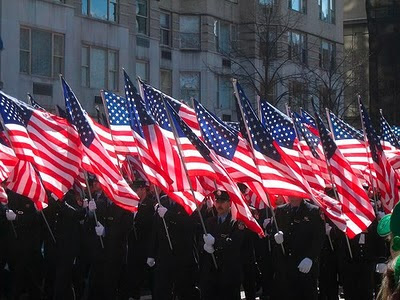 Flags. These are always a bad sign. Hardly a politician appears on television who doesn’t stand in front of an American flag, sometimes three American flags. A venomous nationalism now poisons the air, and grows. We are off and rolling.

The trappings of fascism spread. General David Petraeus, commander of the Eastern Front, poses with the President in the White House in combat fatigues. The country is now the Homeland, reminiscent of the Nazi Fatherland and the Soviet Motherland. We hear of American Exceptionalism, the ritual self-idolization beloved of pathological nationalism. Blood and Soil. The American Dream. Ubermenschen. All we need is a short Austrian.

We may get one. The times ripen for a man on a horse. (Or perhaps a woman: Twitler of Alaska looms.) An ignorant population, unread, unfamiliar with the outside world, focuses its anxieties on troubling dark things lurking abroad, the brown hordes from the south, the rising Chinese, inexplicable Moslems who want to kill all Christians. Sooner rather than later such a mob finds solace in an angry unity. From an unhappy lower middle-class spring Brown Shirts. Wait.