Posted by Nick
In the first 2012 presidential debate, Romney proved that his plan to reduce the deficit while increasing the defense budget is unserious.

Something Romney promised with his winning personality Wednesday night—deficit reduction—is also something hard numbers indicate he cannot deliver. If Obama said anything true it was this: “When you add up all the loopholes and deductions that upper income individuals are currently taking advantage of, you don’t come close to paying for $5 trillion in tax cuts and $2 trillion in additional military spending.” He added: “It’s math, arithmetic.” Romney protested that he was not asking for $5 trillion in tax cuts (too bad) and in the Governor’s defense, Obama’s relentless griping about “loopholes” and “deductions” for “upper income individuals” could mean something—or it could be the same, tired, class warfare drivel the Democrats have been peddling for as long as I’ve been alive. On this, I trust Obama’s accuracy as much as Hulk Hogan’s sincerity. But that “$2 trillion in additional military spending” is something Romney did not even attempt to protest. Whatever hope I had that Romney would represent a dramatic improvement over Obama was dashed—not during Wednesday’s debate—but last May, when CNN reported: Mitt Romney is campaigning on a platform that emphasizes less spending, smaller deficits and renewed fiscal responsibility. But in one budget area, Romney is running the opposite direction. The former Massachusetts governor wants to increase defense spending by leaps and bounds. By one estimate, additional spending would exceed $2 trillion over the next decade… The additional spending really piles up in future years.-Mitt’s Bad Math

Of course Romney solves nothing. And since another crash is on the way, why not let the more overtly statist Democrats take the blame when the inevitable economic depression hits. Romney "won" his debate with Obama, but he was ridiculous and lying through his teeth. He wants to cut off Big Bird's tiny subsidy but increase massively the welfare going to defense contractors by expanding the already bloated military budget by another 2 trillion dollars! This is why Republican politicians can never be taken seriously with regard to reducing spending and ending deficits. They're in love with the warfare state. 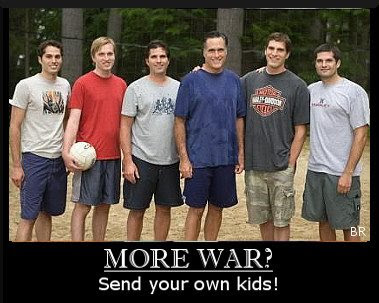