Destruction Does Not Create Prosperity 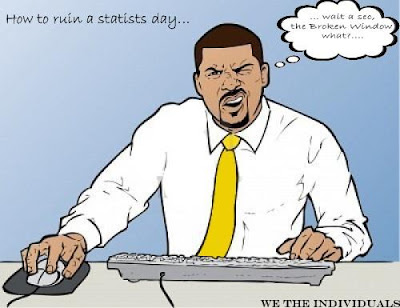 October 8, 2012
Dr. Block [send him mail] is a professor of economics at Loyola University New Orleans, and a senior fellow of the Ludwig von Mises Institute. He is the author of Defending the Undefendable, The Case for Discrimination, Labor Economics From A Free Market Perspective, Building Blocks for Liberty, Differing Worldviews in Higher Education, and The Privatization of Roads and Highways. His latest book is Ron Paul for President in 2012: Yes to Ron Paul and Liberty.
Copyright © 2012 by LewRockwell.com. Permission to reprint in whole or in part is gladly granted, provided full credit is given.
Does destruction create jobs? After natural disasters, terrorist attacks, and wars, some people argue that these disasters are good for the economy, because they create jobs and prosperity. As Prof. Art Carden of Rhodes College explains, this is an example of the "broken window fallacy," a term coined by Frederic Bastiat. When a shopkeeper's window is broken, he will spend money on a new window, which gives income and jobs for glaziers. This activity is "seen," but the "unseen" is just as important: the money spend on a new window could have been spent on other things. Wealth has not increase, but only reallocated from some people to others, and society is worse off by one window.
at 4:00 AM