Drones to Patrol Streets of Seattle

Posted by Nick
This past February President Obama signed the FAA Reauthorization Act, a measure that could permit up to 30,000 drones in United States airspace.-Alternative World News Network 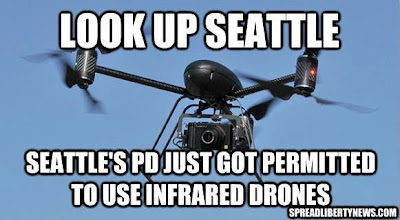 Interestingly, a local news group, the Sky Valley Chronicle noted that SPD has had a history with stretching constitutional boundaries, specifically after the US Justice Dept. found the Seattle PD in “a pattern or practice of excessive force that violates the Constitution and federal law,” which already gives a sign of over policing.-Spread Liberty News
at 7:58 AM