Posted by Nick
My mom thinks it's all from the same fish and chunk light tuna is "the scraps they collect on the deck of the boat and turn into cat food". She says a tuna fisherman told her that many years ago. She will only eat albacore. "Why do you eat that crap tuna" she'll ask me (I only buy chunk light). I explain it, but it falls on deaf ears. For one thing, chunk light is much cheaper than white meat tuna, has more flavor, and, a big plus, less mercury (if it's from skipjack; yellowfin has almost the same mercury levels as albacore, but I've noticed while shopping that yellowfin seems to be labeled as such, so it should be easy to avoid). I don't have tuna every day, I try to limit it. My main concern has been the mercury content. Apparently the FDA says no worries unless you are pregnant, going to get pregnant, will be nursing, or you're a young child. Otherwise, consume all the mercury-filled fish you like. Well, I don't listen to the FDA much, so I stick to my limits on fish. I've never cared much for seafood in general, but what kid wasn't raised on canned tuna growing up? You get a taste for it that sticks with you when you grow up. Lately I've been buying Starkist chunk light tuna in extra virgin olive oil almost exclusively. It does cost more, but the olive oil makes it taste better, and I'd rather not buy tuna in soybean oil, if I'm buying tuna in oil rather than water. The great thing about the olive oil tuna I've been eating is that I don't have to drain it, the oil is so well absorbed by the tuna. I can eat it as a snack right out of the can, add it to salad, make a sandwich by adding a small amount of mayo, or have it with crackers, with or without adding mayonnaise. One thing about tuna is the smell. It can be offensive and strong. That's why I always dispose of my discarded tuna cans by first placing them into a bag, sometimes a sandwich bag, but, as I don't like to waste those, usually just a grocery store plastic bag (don't know what I'll do when the Nanny State outlaws those) before tossing them into the trash can. I'm wary of eating tuna straight from the can at work. I don't know if anyone can really detect it or not, but as I often eat at my desk instead of in the lunch room, I'm cautious. Many years ago, my mom and sister lived briefly with a middle aged cat lady. They were renting a room from her. Her name was Ruth and she lived in an old neighborhood. The entrance to the house that she always used opened into the ancient kitchen, where the smell of tuna was overwhelming, almost an assault as you walked in. She fed her cats (at least a dozen of them) tuna instead of cat food, and there were cats and open tuna cans all over the counters and floor. Needless to say, mom and sis didn't stay there long, but while they did, I got to visit a few times. Ruth was a writer, or so she fancied herself (really, though, anyone who writes is a writer, you don't need anyone's approval, or be published, to call yourself one; if you love to write, do it) and Ruth really had been published once. It was decades ago, and as I let it be known that I had authorial aspirations of my own (I wrote nearly everyday, and even foolishly sent my juvenilia off to publishing houses, sure I was a junior genius who would soon be rich and famous) she let me see the one book she'd had published all those years ago. It was a children's book, and though torn and stained, the dustjacket still enclosed it. I vaguely remember that it was about a boy and a girl solving a minor mystery of some sort. I recall I didn't think it compared well at all to my works of imaginative wonder. It seemed pedestrian and dull, a hack work. I didn't say so, of course, playing along with the idea that I could learn something from the published master, even though I was really thinking that if she could get published, anyone could. It turned out that in spite of the many years since her sole book had come out, Ruth was still writing. She even had a completed manuscript of her latest effort that she kindly let me take home to read. I read it, becoming more inspired with every page I finished. If this crap had any change at all, I was going to have no problem wowing publishers with my prose. On her bookshelf in a bedroom she'd turned into an office, Ruth had a copy of my bible at the time, the Writer's Market, and I wondered who she'd been sending her novel to. It didn't matter, I was a children's book writer, too, and who better to write a children's book than a child? I had my Market at home, and I was prepared to send out my masterpieces to every book publisher I could find, as long as I could get the money for envelopes and postage. At least the pantry at home (I lived with my dad) was well stocked with canned goods, among them lots of tuna. A young writer needs energy, and doesn't have a lot of time to prepare meals. Damn, after writing this I'm getting hungry. I think it might be tuna time. 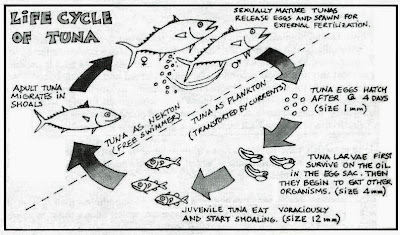 image by Xavier Romero-Frias published under Creative Commons
at 7:11 AM