The Red State "Moochers" Are Democrats

Posted by Nick
Paul Krugman is in puzzlement, having observed that Red States get more welfare funding, while Republican voters oppose the welfare state. He portrays Republicans as “Moochers” who are either hypocritical or too stupid to know their own best interest. But as we know, states do not vote, individuals do. There is only a paradox if Republican voters receive welfare at above average rates while voting against it. From the Gellman-paradox we know that the low-income voters who drag down the Red States average tend to vote disproportionally for Democrats. Republican voters earn significantly more than Democrats, even though Red states earn less than Blue states.-Are Welfare Recipients mostly Republican?


Share of Recipients of each program that self-identified as supporters of Republican party in 2004-2007 Maxwell Poll: 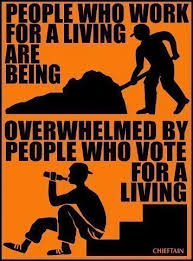 A contributor to this blog liked to attack the "red states", especially the Southern states, because they voted Republican but received more welfare. The never-ending intellectual dishonesty of "liberals" is indeed a sight to behold. h/t to T.C.
at 1:27 PM