Posted by Nick
This post has been sitting in draft since 2009. Don't ask me why I never published it. Perhaps I planned to work on it some more, who knows. Anyhow, I'm only doing so now because there have been a lot of hits for the following post that I just updated by replacing the video that was taken down with a new one: Judge Andrew Napolitano: Abraham Lincoln Was A Tyrant! So, I discovered it by accident while searching this blog for posts on Lincoln. If it hadn't had the label "Lincoln" attached to it, it would still be hidden and down some forgotten hole. Oh well, it's not much but it finally made it to the SE front page. Kinda gives you hope, doesn't it? See, anything is possible. 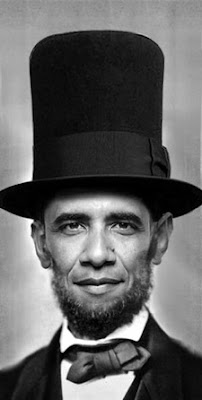 
There has been much about Obama's Lincoln obsession and talk (either explicit or implied) of Obama as some sort of "new Lincoln". The unquestioned assumption is that Lincoln was wonderful and our best president ever.


Marvel's 2006 book, Mr. Lincoln Goes to War, says this on the inside cover: "Marvel leads the reader inexorably to the conclusion that Lincoln not only missed opportunities to avoid war but actually fanned the flames — and often acted quite unconstitutionally in prosecuting the war once it had begun." This is obviously not how to win another "Lincoln Prize."
at 10:09 PM