Posted by Nick
From the video (which is via T.C.): "Jaguar diet consists of 85 species of different animal...so anything along the rivers, and in the rivers, is a potential prey item, it's on the menu. Walking along the riverbank for a Jaguar is like us scanning a buffet line". The question is, where are the PETA loons when it comes to protection of the victims of the Jaguar? Don't those animal have a right to life too, not just the ones humans slaughter for food? Remember, PETA's not just against animal cruelty and factory farming, they're against all eating of animals by humans. But what about animals that nature designed to be carnivores? Are they being cruel when they kill? Should they too become vegetarians? Or should they just die? The raving lunacy of vegan/vegetarian anti-meat eating hysteria is easily shown by the glaring contradictions in logic that it takes to hold such anti-human positions. In the PETA world, isn't this what the "wild kingdom" should look like: 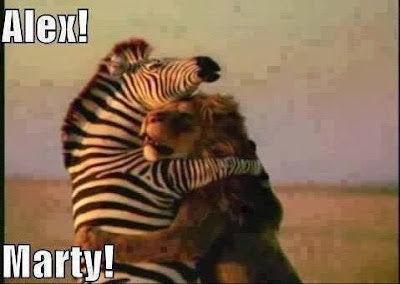 Email ThisBlogThis!Share to TwitterShare to FacebookShare to Pinterest
Labels: animals