Posted by Unknown
I keep reading from ignorant, know-nothing gun nuts how we all need to be armed, but that hasn’t been my experience here in reality (maybe I just haven’t been watching enough action movies).

Case in point, 26 year old George Zimmerman decided he didn’t like the look of a black teenager walking through his gated community, so he shot him. With no crime committed besides walking-while-black, Zimmerman took it upon himself to end a young man’s life because… and that’s where I don’t have an answer.

Oh sure, Zimmerman is the head of his local Neighborhood Watch, which I guess licenses him to make life-or-death judgment calls. I’m sure he was just “protecting” himself from such a vicious 17 year old boy on his way home from buying candy at a convenience store. 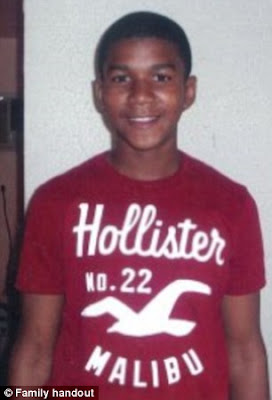 Why couldn’t Zimmerman just call the police, like any sane person? Well, he did, and he was told that police were on the way… and to stop following the boy. He didn’t, ended up engaging Trayvon in conversation, and at some point murdered him in cold blood.

And if that isn’t bad enough, the police didn’t do the right thing when they arrived, either. They didn’t run a background check on Zimmerman, whose violent past would have been revealed, like when he was arrested for battery and resistance.

When police arrived, rather than arresting the killer, they let Zimmerman go, presumably because they have more important things to do than arrest adults who shoot kids. I mean, this is Florida, after all. There’s bound to be some cocaine somewhere that needs confiscating.

There’s nothing quite as disturbing or disgusting as street justice.

Email ThisBlogThis!Share to TwitterShare to FacebookShare to Pinterest
Labels: guns