Iran vs US Comparison Chart Gets Brainwashed Idiots In An Uproar 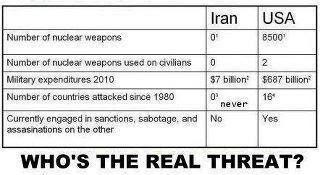 The above received the following comments from the real live (but brain dead) morons below.

And what YOU don't know about IRAN and their behind the scenes murder squads and groups they pay to create chaos in other countries .. would set your hair on fire if you actually knew what goes on ... yeah, let's shift that chart to DON'T FREAKING KNOW in the Iran collumns ... because .. whoever put this together .. IS An IDIOT!


hey i got a idea.and this is to anyone that thinks the U.S is so bad and everywhere else is so good.buy yourself a ticket get on a plane take a trip and never bring your unAmerican ass back.not only does your chart look stupid and is wrong.only a American hater would post trash like that.have a great trip.


Was this made by an American


I don't get it. Americans that critizice this country should just get out and live anywhere else, like Iran, for example.


Really, if you think Iran is a good place and their people are so cool and never do anything wrong go there you will be raped and robed before sunset... Iran does nothing for the world. GO FUCK YOUR IRAN LOVING AMERICAN HATING ASSES...


Oh my, that last guy was ANGRY! No doubt super angry that the murderous US military hasn't started killing Iranians by the tens of thousands yet.
at 5:14 PM

Email ThisBlogThis!Share to TwitterShare to FacebookShare to Pinterest
Labels: Iran