Jim Bakker Had A Dream About Young People

Posted by Nick
Disgraced "televangelist" Jim Bakker of the old PTL Club (he was convicted of fraud and conspiracy) has been back on television since 2003 with The Jim Bakker Show. These guys always seem to make it back to their profession (and I don't mean of faith). Even Peter Popoff (exposed back in the 1980s by James Randi-what was it by the way about TV preachers and the 80s? Jimmy Swaggart has his moment then as well) came back from his disaster and is making lots of "the root of all evil" again (yes, I know it's the "love"). 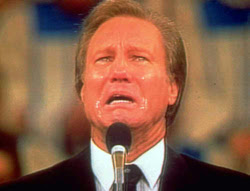 Anywho, Bakker's new show seems mostly (from what I've seen of it) to be about selling stuff, mostly "prepper" items such as emergency food supplies and solar powered electric generators (only $1700). I'm not against any of this type of product or people selling it, but so far I've seen very little air time given on his show to much else. Now, maybe the man is sincere and did have a change of heart (though no one could be blamed for having doubts). He did admit "I was wrong" in a book of that title. But with Bakker I can't tell. He's in the middle in my book between Popoff (a man I despise and believe is as in it for the money as much as ever) and Swaggart (whom I believe IS sincere and always was, even back in the 1980's when he was visiting hookers in motel rooms). I have my own "Jimmy Swaggart Theory" on that, but briefly I think it came down to his personal weakness and Arminian theology (probably more properly his own version of John Wesley's views on salvation). I saw Swaggart once say on one of his bible study shows (I paraphrase) that one could lose one's salvation, then repent and be saved again, over and over again. That, I believe, is the key to Jimmy Swaggart. As for Jim Bakker, I still haven't figured him out.
at 2:25 AM

Email ThisBlogThis!Share to TwitterShare to FacebookShare to Pinterest
Labels: Religion