Bernie's Products for the Proletariat

Posted by Nick
I once had a Marxist college instructor who asked the class why we needed so many different brands of toothpaste, and actually proposed that observation as evidence of the wastefulness of capitalism and superiority of the Communist governments of the Eastern Bloc countries. 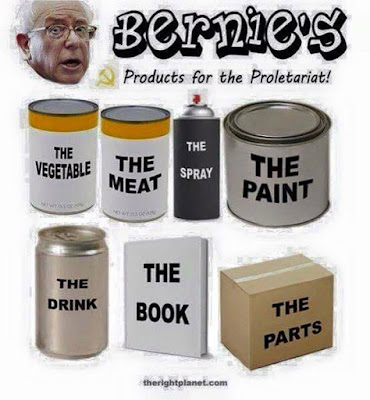 On May 12th, I presented my analysis of the polling as of that time, headlining, “The Early Signs of Whom The Next U.S. President Will Likely Be: Presidential Polls Look Confusing Regarding Bernie, But Downright Bad Regarding Hillary & All Republicans.” Based on the net-favorability ratings of candidates in the first poll that had really meaningful results on that most important of all factors (which poll had just been published), and also based on the latest available reliable poll of Americans’ ideological preferences (which had been taken in 2011, but that’s okay because ideology changes only very slowly), I concluded that Vermont U.S. Senator Bernie Sanders was likely to surprise on the upside at the start of his contest, and that, “Sanders would probably be able to crush any Republican except perhaps Rand Paul, if he were to win the Democratic primaries.” He is already surprising on the upside (though pundits haven’t yet caught on that Hillary’s a dud), and so I am now predicting that Sanders will win, first, the Democratic nomination, and then the White House.-My Prediction: Bernie Sanders Will Win the White House