Posted by Nick
Cup O' Noodles were my first introduction to instant ramen noodles. Though Nissin later changed the U.S. name of the product to just "Cup Noodles" to me they will always have that O. The other major brand is Instant Lunch, and as for myself, I can't say I have a preference for one or the other. They both taste pretty much the same to me (though this is not necessarily true of the respective food companies other rival products). 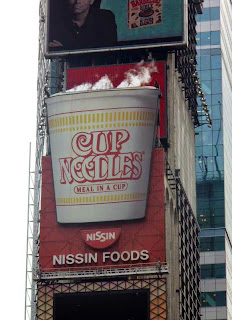 "Cup Noodles ad -Times Square 02" by Karan J from Sydney, Australia - Cup o' Steam. Licensed under CC BY-SA 2.0 via Wikimedia Commons. I was introduced to noodles in a cup (to be generic) back in the 1970's. I was living with my dad in Colville, Washington, North of Spokane. We often enjoyed these noodles in the evening (and I'm thinking in the cold evening of winter in particular, when all we had to otherwise warm us was one wood burning stove in the corner of our little rented home). We usually made toast to go with them, and a specific toast, made from the rich, nutty tasting Oroweat Honey Wheat Berry bread. So good and once buttered I would often dip mine into the broth of the noodle cup. We had several cats that would beg for the toast. I guess they liked the butter and heartiness of the bread. We would sometimes break off little pieces of toast and feed it to them. I don't eat cup noodles much anymore, but whenever I do, it brings back many of those memories, and of course, the noodles themselves are an easy, quick to prepare comfort food.
Japan - Masters of Cup Noodles!
at 1:47 AM