Posted by Nick
Making yourself comfortable on a NY subway train could land you in hot water, especially if you occupy too much space Fuck the MTA and NEW FASCIST CITY (AKA "liberal" run NYC).

The government of New York spent on an ad campaign telling men to stop sitting with their legs spread. On May 22nd, police arrested two Latino men on the charge of ‘man spreading.’ Some people are arguing that this is an excuse by police to increase their arrest quotas, and to crack down on undesirable ethnic minority males. Russia Today reported that the NYPD issued approximately 1,400 summonses for manspreading in 2015.-The First Male Has Been Arrested For “Manspreading” In NYC 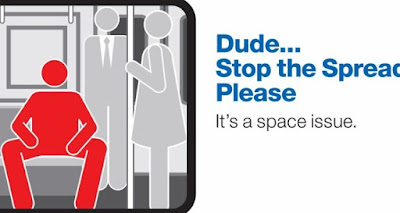