Dianne Feinstein Is an Enemy of the Bill of Rights and Should be Locked Up!

Posted by Nick
Out of many facets of degradation of our culture, one of the worst is the decline of the basic freedoms enshrined in (but not created by) the US Constitution and Bill of Rights, this has mostly been executed by this same process of turning rights into mere priveleges, this goes that extra step by saying only educated professionals have that privilege. This same lack of ethics and understanding of basic human rights can be seen everywhere in the surveillance state and in the way police treat the citizens they are supposed to be protecting and in the courts that coerce people who cant afford a lawyer into rescinding their right to a fair trial by a jury of their peers by threatening them with a longer sentence if they refuse to plea bargain and admit they are guilty even when they know they are not.-Matt Sonnie 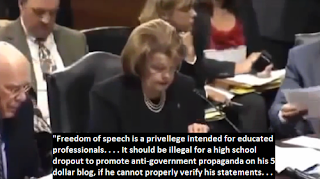