Ron Paul on Face the Nation

The CNN/ORC International survey released Friday indicated only 25% of Americans support the war in Afghanistan, a new all time low. Most Republicans even voiced opposition to it, an unprecedented detail in the entirety of the decade-long war.


“We cannot fight wars by polls,” Defense Secretary Leon Panetta said on Tuesday. “If we do that we’re in deep trouble. We have to operate based on what we believe is the best strategy to achieve the mission that we are embarked on. And the mission here is to safeguard our country by ensuring that the Taliban and al Qaeda never again find a safe haven in Afghanistan.”-Support for Afghan War Hits New Low, Majority Say Pull Out Before 2014

Wait, we've been fighting this war for over ten years now, and we still haven't accomplished our "mission"? WTF? And I though it was also all about "democracy". Strange then that the Obama regime just ignores the will the people it is supposedly representing.

Ron Paul, as usual, is more in tune with the American public than either the awful B.O. stinking up the White House or the other Republiduds running for the GOP nomination.


Don’t count Ron Paul out yet. The Texas Congressman may not have secured any headline-grabbing victories in state primaries and caucuses. He may be trailing in the unofficial delegate counts based on these contests. But he is cheerfully pressing onward, confident that he can keep right on going all the way to the Republican National Convention (RNC) in Tampa and possibly even come out of the convention the GOP’s nominee for President.-Can Ron Paul’s Delegate Strategy Confound Conventional Wisdom? 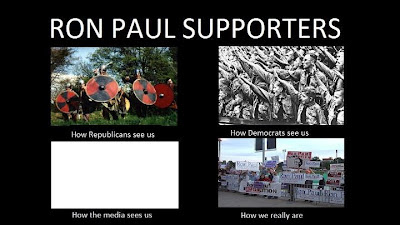