Posted by Nick
Rick Santorum has more or less built his entire career on the idea that Muslims are the great threat of our age and that all of Western society must be reformed into militant soldiers against Islam. We must "wake up" to the threat, Santorum believes. Watching the anti-Muslim crowd alternate between screeching for Holy War and sombre brooding over the grave threat, it is difficult to not think of the anti-communists of the days of yore, like Whittaker Chambers and Frank Meyer, who, being ex-communists, were absolutely convinced that the world was but in the midst of a losing rear-guard action against the superhuman army of Stalinist Soldiers of the Millennium.

Meanwhile, according to John Allen of the National Catholic Reporter, the Catholic population in Africa has increased 6,700 percent over the past century. Globally, there are not many more Muslims than the 1.1 billion Catholics, and when we add in other Christians, there are nearly twice as many Christians as Muslims.

But the purveyors of the Holy War will never be satisfied. And just as the anti-communists beat the drum for more and more government, more war, and more police statism; just as William F. Buckley called for a totalitarian bureaucracy in America to defeat communism, so it is for the anti-Muslims. Rick Santorum will not rest until the last American freedom has been extinguished in the name of killing a few more Muslims, but even if he fails, it seems likely that debt, bankruptcy, war, tyranny, and societal dysfunction here at home are much bigger threats than a bunch of supposedly hyper-fertile Muslims.-The Myth of High Muslim Fertility Rates, and the Threat They Pose 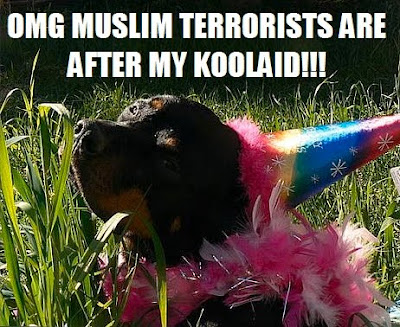 The FBI in San Francisco used a public relations program billed as "mosque outreach" to collect information on the religious views and practices of Muslims in Northern California and then shared the intelligence with other government agencies, according to FBI documents obtained by civil rights groups.